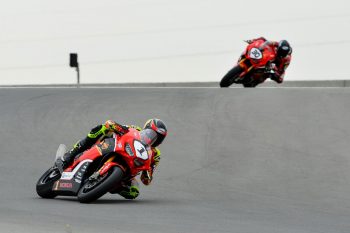 Defending champion Herfoss slotted his CBR1000RR SP Fireblade into ninth on the grid, however, was forced to settle for 12th position in the first of three 10-lap encounters on Saturday afternoon.

Sunday was an improvement for the 32-year-old, riding a controlled race to sixth place in the second outing. In race three he made further progress, battling for the podium and ultimately crossing the finish line in fourth to secure fifth overall.

“This weekend was definitely a difficult one in a few ways, although we managed to finish fifth overall in the end,” Herfoss commented. “To finish on a better note with fourth in race three was positive, so we will take the points from here and look to rebound again when the series continues.”

It was a terrific weekend for Penrite Honda Racing newcomer Chiodo, showcasing his talent by qualifying in position seven and then leading the majority of Saturday’s opening affair in which he finished P4.

Races two and three on Sunday provided added challenges as he scored 11th and ninth-place results for seventh overall, but still managed to display front-running form to round out the weekend.

“It was a good feeling to be in that position, to lead a race in the Superbike class and be toward the front,” Chiodo reflected. “I’ve taken confidence from this weekend and it was positive to finish all three races again – it will be important to build on this result and keep moving forward from here.”

Penrite Honda Racing team manager Shaun Clarke admitted it was a tough weekend of sorts, however, was impressed with the way Herfoss remained composed and was encouraged by Chiodo’s breakout effort in the premier class.

“It was a bit of a tough weekend for most people and, although we had a little bit of bad luck, it was worse for others,” explained Clarke. “We got out of this round unscathed, but we do need to get to work and do a little bit more learning.

“Mark had a really good weekend. He is getting a lot more confident with the bike, so it’ll only be onwards and upwards for him. The speed has always been there, it’s just a matter of applying it for him and hopefully, he can keep pushing forwards from this point.”

Herfoss now sits fourth in the championship standings, while Chiodo has climbed to 10th entering round four at Morgan Park Raceway in Queensland on 5-7 July. Visit www.asbk.com.au for further information on the series.