The Bend ASBK clean-sweep for Kawasaki BCperformance and Staring 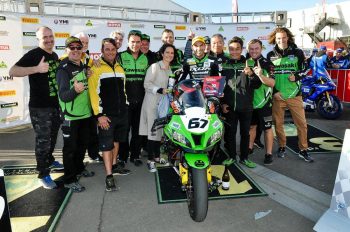 Staring, the BCperformance-prepared Kawasaki Ninja ZX-10RR and Dunlop tyres proved an unmatched combination across the trio of 10-lap races at the world-class 4.95-kilometre Tailem Bend circuit.

After qualifying in sixth position, former ASBK champion Staring was consistently quick over race distance to win by 4.651s in Saturday’s opening encounter. He repeated that performance in race two on Sunday morning to win by 7.908s, then topped race three by 4.559s.

Those results now see Staring atop the Kawasaki Superbike championship standings by one point following three rounds of seven, which is a brilliant reward for the Western Australian and the entire Kawasaki BCperformance team entering the mid-season break.

“Even with the advantage that we had in the Dunlop tyres, I still didn’t expect to have a weekend like this,” Staring beamed. “A huge thanks to the Kawasaki BCperformance team, everybody at Kawasaki Motors Australia and also to Dunlop – how your fortunes can change!”

A front row start out of second position put Staring in a strong position for Saturday’s opening 12-lap affair, in which he starred with a two-second victory on debut. He led the majority of Sunday’s second race, until ultimately crossing the line in second place.

“We’re ecstatic with this result achieved with the new Kawasaki Ninja ZX-10RR and Dunlop tyres,” Kawasaki BCperformance team manager Kelvin Reilly said. “All credit to Bryan, he rode absolutely superbly all weekend and didn’t put a foot wrong – he got the job done. And to have Lachlan in the top 10 twice, unbelievable!”

The weekend was also a positive one for second of the Kawasaki BCperformance riders, Lachlan Epis, charging to 10th position in races one and three. Those were his best rides of the season and a huge boost at this point of the year.

An unfortunate crash in race two cost him a higher overall result, eventually credited 14th for the weekend, however he can take confidence from his top 10 showings in each of the other races aboard the Ninja ZX-10RR.

“We’ve actually had a really good weekend aside from that crash in race two,” Epis explained. “We took two top 10 finishes, which was the highest I’ve finished this season, so it was great. Getting a good result going into the break is inspiring and to see what Bryan achieved is motivating as well.”

The Kawasaki BCperformance Junior Team lined up in the Supersport 300 vision, in which Callum O’Brien was 17th overall with a 15-17-14 scorecard, with teammate Tayla Relph 19th in race one and 18th in race two, but unfortunately crashing heavily in race three.

GSR Kawasaki rider Glenn Scott delivered his strongest performance of the year to date, scoring sixth overall via 7-9-8 finishes, while Matt Walters rode his Kawasaki Ninja ZX-10RR to ninth overall with a high of eighth in race one. It was a promising round for Senna Agius on his Ninja 400 in Supersport 300, landing on the podium in race two.

The 2019 Australian Superbike Championship (ASBK) will continue with Morgan Park Raceway’s fourth round to be held on 5-7 July. Visit www.kawasaki.com.au for further information on Kawasaki Motors Australia.