Inspiring step forward for Walters in The Bend ASBK weekend 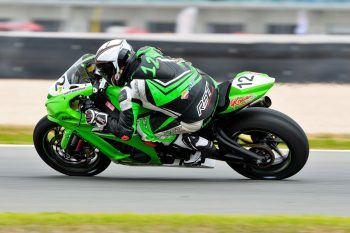 Matt Walters Racing has taken confidence from another consistent result of ninth overall at The Bend Motorsport Park’s third round of the 2019 Australian Superbike Championship (ASBK) series in South Australia.

After qualifying in 10th position via Q1 into Q2 with a best lap time of 1m53.927s, team rider Matt Walters gradually gained momentum to score 8-12-12 finishes across the trio of 10-lap national races contested over the weekend. He also currently sits ninth-place in the championship standings following three of seven rounds.

Those results came despite Walters experiencing significant tyre wear over a race distance, however, most importantly, the privateer operation has found an optimal setting with its Kawasaki Ninja ZX-10RR that he believes could boost him into podium contention in upcoming rounds. In race three his lap time of 1m53.184s was one of the fastest of all in the talent-packed field.

“It was an interesting weekend because we found some really serious pace with the bike,” Walters recalled. “Unfortunately we couldn’t keep the tyres up to it, but I was in the same boat as everyone in terms of the tyre wear.

“We learned a few things in terms of chassis set-up through trial and error that gave us two seconds out of the bike relatively easily. When we get to a track that doesn’t wear the tyres out too much I think we’ll be real serious contenders to actually win races. It’s taken us a while, but I believe we’ll be there.

“It’s a bittersweet feeling at the moment because I didn’t get the positions that I wanted to and it was out of my control, but coming into Morgan Park – where I had great results last year – we have a better motorbike in the Ninja ZX-10RR.

“I’m confident we will be able to challenge for the podium, so I’ll definitely be working hard with my training and preparation between now and the next round, will do a couple of track days at Morgan Park and we’re looking forward to it.”

Next for Matt Walters Racing will be round four of the 2019 Australian Superbike Championship (ASBK), scheduled for 5-7 July at Morgan Park in Queensland. Like Matt Walters Racing on Facebook and visit www.asbk.com.au for further information on the series.