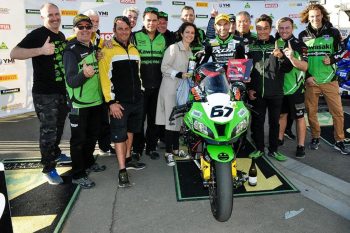 The third round of the Australian Superbike Championship (ASBK), held at The Bend Motorsport Park over the weekend, was run in conjunction with the Asian Road Race Championship (ARRC).

BCperformance Kawasaki Racing Team superbike racer Bryan Staring not only took three from three race wins for first overall in the ASBK, and the championship lead, but second overall in the ARRC with a 1-2 result.

Starting from sixth on the grid after a setting a time of 1:52.478 in qualifying, there was a lot of confidence in the BCperformance garage, with the circuit highlighted as suiting the strengths of the Dunlop race tyre with the talented Staring at the controls. Allowing other racers to take the lead, Staring, in all three ASBK races, held his ground, raced to plan and moved his way through the field to finish ahead of the pack by between 4.5 and 7.9 seconds.

With the ARRC choosing Dunlop as their control tyre, Staring (#60) was once again able to control race one to get the better of fellow Aussie, Broc Parkes (#23), however, it was Parkes that adapted to the conditions to take out race two and overall round win.

Bryan Staring: “I was confident heading into this round that we would do well here, and, to be honest, it was critical to our championship. The Dunlop that we use in the ASBK offers great grip, but its real strength is how long the grip lasts. I was able to ride at a consistently fast pace thanks to the setup from the BCperformance crew and come home a lot stronger than the rest of the field. In the ARRC it was a different story, with the whole field being on the same Dunlop tyre. I knew I had the speed and the equipment from the Kawasaki Thailand Racing Team to win; I just had to manage the race and adapt my style to ensure I kept that same consistent fast pace. Race one went to plan, but in the second race, Broc (Parkes) picked up a little of what I was doing in my other races and I just missed out on a five from five weekend by less than half a second! I’m really happy to be back on the top step, and keep my season on track.”

Dunlop Motorsport Manager, Robbie Bugden: “What a way to bounce back in the ASBK! The Bend is an incredible facility, with a grippy, abrasive 4km surface that proved, once again, that Dunlop is the tyre to be on for fast, consistent times, confidence, and lots of laps. Bryan did an outstanding job to take advantage of our strengths, and it was even better to see him take four from five race wins to show a talented ARRC field that the ASBK has some of the fastest and most talented racers in the world.

With the fourth round of the ASBK in Morgan Park, Queensland, over two months away, on July 5-7, the Dunlop ASBK race service team will get some much-needed rest and recuperation before taking to the ground once again to offer technical advice and tyre fitting to competitors.