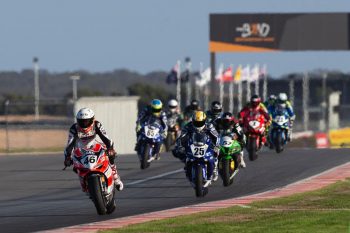 Taking Pole and a 2-2-5 result, Mike Jones has raced to second overall for the third round of the 2019 Australian Superbike Championship (ASBK) at The Bend Motorsport Park in South Australia, just 10 points off the championship lead.

After a solid single day of testing prior to the race weekend, the DesmoSport Ducati crew worked hard to ultimately give Mike Jones a Panigale FE Superbike capable of a new lap record (1:51.220) and Pole Position during Saturday’s 15-minute qualifying session. Over the three-race format, minor changes in set-up, and some incredible riding from Jones saw the Brisbane-based racer work hard to conserve grip on the aggressive track surface while also putting in fast, consistent laps to be in contention for the win in all three outings.

Ben Henry: “This isn’t the same Mike Jones that rode our bike in 2016. We’ve improved as a team, and Mike has improved as a rider an incredible amount. The Bend is a tough track on tyres, yet Mike adapted his style to remain fast, while conserving the rear tyre at the same time. There’s only a few racers who can see a fast lap, pull on a helmet and go even faster one lap later, and that’s exactly what Mike did in Qualifying to take pole with no time left on the clock. He impressed me this weekend.”

Mike Jones: “I’m closer to the championship lead, and I’m feeling good after a strong weekend for us. Ben (Henry) and Paul (Free) worked extremely hard to give me a great motorbike, and I just felt very comfortable on the bike. We had a strong plan, especially after the first race, but a bad start in race two hindered me significantly and then in race three I was nearly wiped out of the race altogether by another rider. So, taking that into account and still coming away with second overall, I’m really happy.”

DesmoSport Ducati now have a a two-month break in the ASBK calendar before heading to the teams’ home round in Morgan Park, Queensland on July 5-7.

ake sure you follow the team’s social media to stay up to date:

For more information on the Australian Superbike Championship head to www.asbk.com.au