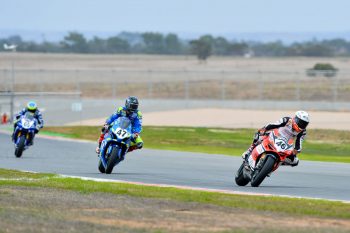 The pole position belonged to Jones with a scorching new best lap of 1m51.220s at the world-class and highly technical 4.95-kilometre circuit, leading an all-Pirelli top five on the grid. Following the three 10-lap races contested over the weekend, Jones was second and Halliday completed the podium overall.

In race one, which was reduced to nine laps following a red flag stoppage, Jones crossed the line second and Halliday third. Jones was again P2 in race two ahead of Wayne Maxwell (Team Suzuki Ecstar) on Sunday morning before Maxwell was runner-up and Halliday third in race three. Fourth overall was Josh Waters (Team Suzuki Ecstar) from Troy Herfoss (Penrite Honda Racing).

The preferred front tyre used by Pirelli riders in the Superbike field was the Diablo Superbike 125/70R17 NHS TL SC1 (552J), while the majority of entrants on Pirellis used the Diablo Superbike 200/65R17 SC0 (551J) rear tyre option. A new lap record of 1m52.875s was recorded by Jones in the opening outing of the round to further outline Pirelli’s competitiveness.

In the Australian Supersport Championship category it was Tom Toparis (Yamaha) who scored pole position with a best lap of 1m55.798s, going on to win the overall with 1-1-2 finishes across the pair of eight-lap races. A 1m55.912s set by Toparis in race one on Saturday was a new lap record in class.

Denying Toparis of the clean-sweep was South Australian Nic Liminton (Yamaha), whose 2-2-1 scorecard handed him second overall for the weekend, with Reid Battye (Suzuki) making it back-to-back round podiums in third, just one point ahead of Broc Pearson (Yamaha) and Dallas Skeer (Suzuki) filled the all-Pirelli top five.

It was a consistent effort from Harry Khouri (Yamaha) that earned him the Australian Supersport 300 victory via 2-4-3 results, ahead of races one and two winner Olly Simpson (Yamaha). Unfortunately for Simpson, a technical problem in the final outing won by Hunter Ford (Yamaha) cost him the overall. Third overall was Brandon Demmery (Yamaha), completing a Pirelli podium sweep.

“Round three of ASBK at The Bend was a challenging event for Pirelli,” commented Pirelli product manager Garry Crilly. “Although not ideal conditions, Pirelli riders were able to take pole for all three classes with podium positions in Superbike, Supersport and Supersport 300. I want to thank our Pirelli service and technical staff for their hard work over the week. We now move our focus to Morgan Park for the next round in July.”

Round four of the 2019 Motul Pirelli Australian Superbike Championship (ASBK) is scheduled for Morgan Park in Queensland, to be held from 5-7 July.