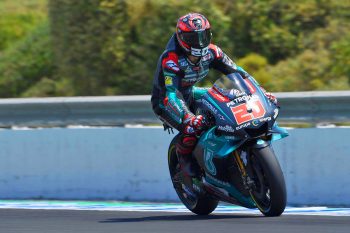 Petronas Yamaha SRT rookie Fabio Quartararo is trying to extract the positives following a crushing mechanical problem that denied him the chance of a first MotoGP podium at Jerez.

After scoring a stunning pole position on Saturday in just his fourth premier class race, the Frenchman was running second when his YZR-M1 was caught in third gear on lap 14.

“You could say that I am both disappointed and happy,” Quartararo said. “The race was very good, I felt very good on the bike and it was fantastic to ride with the top riders. That was until we suffered a small mechanical problem with the gear-shifter.

“It’s something very small but it affected us a lot, forcing us to abandon the race. Despite this, I’m happy with the work that we’ve done during the weekend and we will continue in the same way at the coming races. The whole team have done an exceptional job, but in this sport, there are things that you can’t control.

“As we did in Qatar, we will take away the positives – there were many of those at this GP. Before the season began, none of us expected to be fighting for the podium and to get a pole position in the fourth race of the year, so we should be happy with the work that is being done.”

The gear-shift issue quickly forced Quartararo out of contention, returning to the pit box and ending his weekend prematurely. His home round will take place at Le Mans on 17-19 May.