With the competition in 2019 moving forward, Aprilia needed some extra spice. The face of the RSV4 is nearing 10 years old now, but the beauty of this hyper-sports machine is its ageless appeal. More grunt, more handling, less weight and more stopping power make the 2019 Factory edition better than ever, and it’s the closest bike yet that I’ve ridden to a factory Superbike. 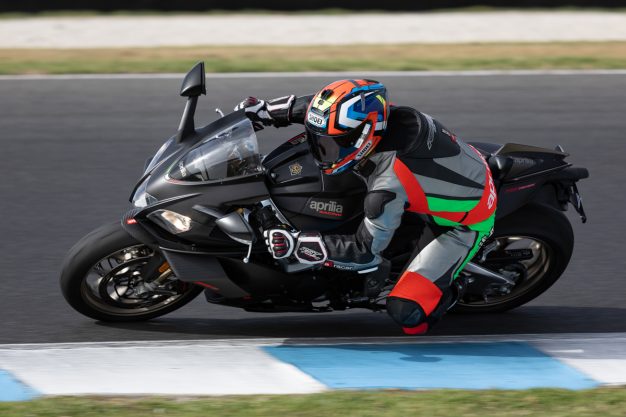 Where we rode:
Phillip Island Grand Prix circuit is arguably the best environment in the world to put a modern Superbike through its paces. I’ve done thousands of laps at the place and still never get bored. It’s true that one of Australia’s tighter tracks could have been chosen, but when you have a bike with the speed of the RSV4 1100 Factory, it would’ve been a shame to not test its full potential out. Don’t get me wrong, on a tighter track the RSV4 will be brilliant, but Phillip Island was the A1 choice to let this bike breathe properly. An indicated 303kph down the main straight was all the validation I needed. 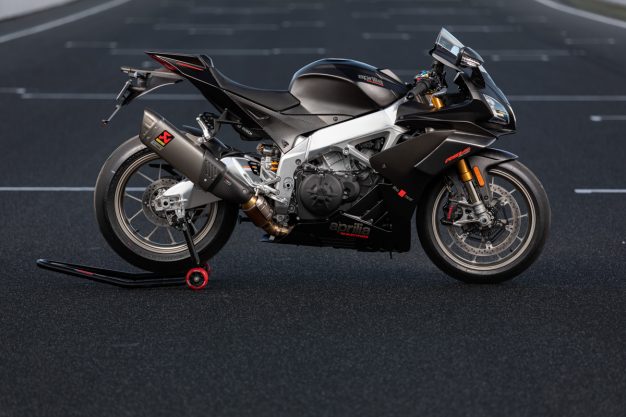 Technical features:
Its amazing how those MotoGP inspired wings change the face of what is already a gorgeous looking motorcycle. They substantially alter the silhouette of the ’19 model for the better, and with this year’s matte black and carbon mix paint scheme mated with the gold wheel combination, sex appeal is off the richter scale. Passion and a hint of history must be part of the reason that anyone would look at an Italian stallion like this, but if you are in the market for more than pose value, the Factory has the best of everything – Ohlin’s Nix 30 front fork, a racing TTX 30 rear shock, the latest Brembo monoblock front calipers paired with Brembo master cylinder, updated electronics, and then there’s that extra 100cc. I don’t know about you guys, but I’m not about to go World Superbike racing any time soon, so to have that extra capacity over the 1000 is a big bonus. It makes it non-race compliant, but the 1000 is still available for the racers lurking out there. Let’s say though that the 1100 is like buying a 1000 with a race kit fitted, but better! The one area that has let the RSV4 down a little in years gone by has been its electronic package. It used to be too intrusive meaning turning it off to do fast laps was needed. Thankfully this year Aprilia have really lifted their game and produced a much better software package. I found that leaving the traction on was beneficial in improving my lap time which is very rare nowadays. Good to see that Aprilia have given a quality system to the everyday punter. 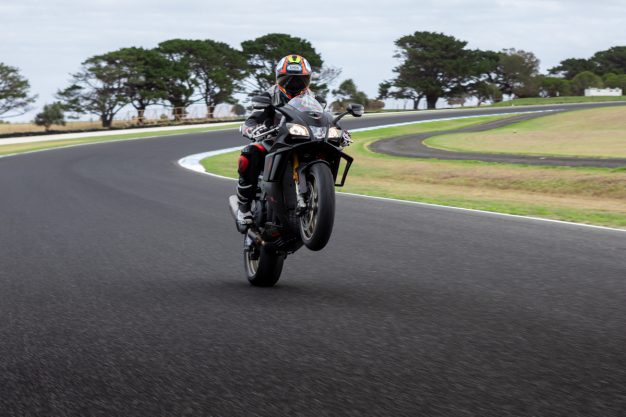 Motor characteristics:
When the Tuono was increased in capacity a few years ago, we tested it in outback New South Wales. I’d ridden the 1000 Tuono, which proved to be an impressive machine, but the 1100 was incredible. It was really rideable, lots of mid-range with the ability to loft the wheel at virtually any speed. It made all the testers on the day look good and could out accelerate any other bike we had with us to the coffee stop. I knew that putting an 1100 in the RSV4 sounded like a bloody good idea, but why put a standard Tuono engine in when you can whack in an up-spec version, and that’s exactly what Aprilia did. A new standard setting 217hp is pumped out of the donk now with 122Nm of torque backing that figure up. It literally feels like a bullet when you squeeze the throttle. It’s lost none of its tractability though, with ride-ability better than before and more bottom and mid-range grunt. Internally, the power gains have not only come from the increase in capacity, but a raft of improvements. Starting from the top, the heads have been CNC machined for the first time which takes away any imperfection associated with a plain cast finish. There’s also a better match to the Pankl pistons which have the latest race technology coatings and shape straight from the race departments data bank. The bottom end uses a nice set of titanium Pankl rods to keep the racing theme going in what can only be described as one of the best feeling motors on the market. The oil system and water system has been revised helping to reduce weight and cooling ability, which also helps with improved reliability. The gear ratios internally have been adjusted to give an optimum setting for the extra grunt delivered. 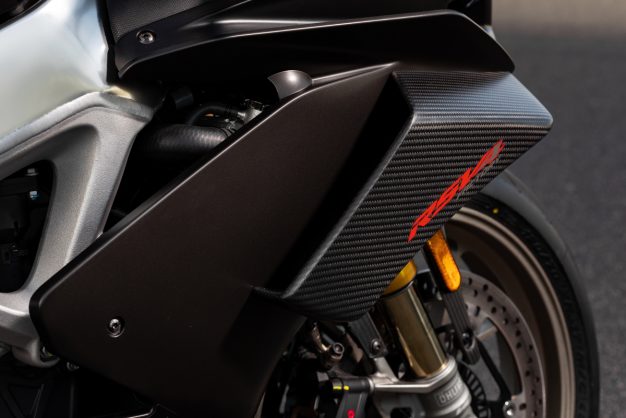 Chassis feedback:
There’s no mistaking the RSV4 when you push the starter button. It has a magnificent burble that means real business when its fired up. There’s more to it than just sound though because this bike is lighter, more powerful, has better brakes, better handling, better electronics, better chassis than its predecessor. It should be faster and better, and it is. I was really looking forward to getting out on track with the 1100 because I wanted to see just how close to a proper super bike this bike was. Now I’ve ridden plenty of late model 1000cc machines at the Island and they are all good, but this Aprilia is a little different. It’s not made to accommodate one or two riders that need a bike made to a set of rules to race, it’s made for the bulk of people that want race-type power with reliably. I hit 303kph down the straight at the Island early on – that’s the quickest I’ve ever seen to date on a production machine. Handling wise the bike is every bit as accurate as its always been, clipping apexes with ease and driving hard out of slow, medium or fast corners with wheel spinning power. The balance initially felt a little steep for my liking. but we had Byron Draper of Ohlin’s factory fame on hand who made a few small changes to the Ohlin’s forks and TTX shock to give the bike more trail and feel. With that trail, my lap times plummeted and the bike felt like a race bike to ride even with the standard Pirelli SP tires fitted. It’s the top-quality Ohlin’s and chassis combination that give the owner a real set of tools to work with and make it possible with this bike to tune a personalised spec in for you. The bike is capable of 1m39s or better lap times with the OEM tyres out of the box, so if you add a set of sticky tyres things would get real interesting. The five-kilo weight reduction from last year adds to the feeling of the ’19 too. Flicking from side to side through the hayshed corner gave me very agile steering to get the bike exactly where I wanted it to be. Perhaps the wings helped here, keeping the front contacted to the ground better. Could I feel the wings? It is a fact that more downforce is added to the front (eight kilograms at 300kph) and that that does help, but like any good tool or setting, the bike remained neutral and one thing couldn’t be felt over another. What I will say on the wings is that there are certainly positives. 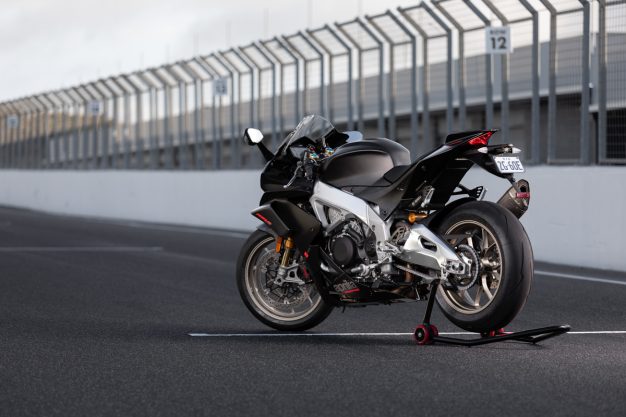 Final thoughts:
There have been no short cuts in 2019, a year where battle lines have been drawn. The obvious competitor is the Ducati Panigale V4, which is making waves of its own in the WorldSBK championship this year with Alvaro Bautista on-board. But, that’s a different bike to the road version. Is the Aprilia better than the Ducati is in 1100 guise? A hard question to answer, an easier way to put it is its its equal with a little more power and grunt. The RSV4 offers more when you consider its extra chassis adjustability, and all of that for about $4000 less. Since I first heard about the RSV4 project all those years ago, I became a big fan. There’s no secret that the best layout for a Superbike is a V4, and now its just a matter of daring to be different. Take one for a spin and you will get my drift, literally. 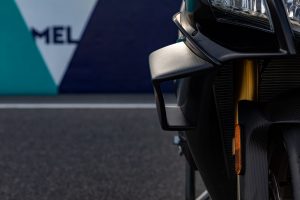 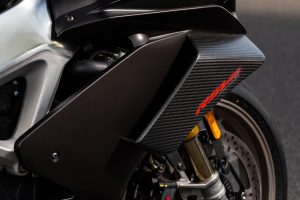 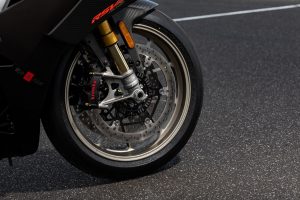 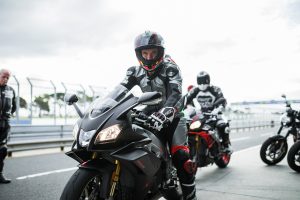 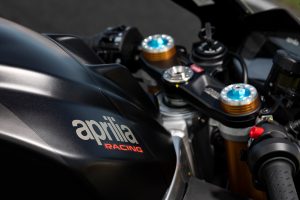 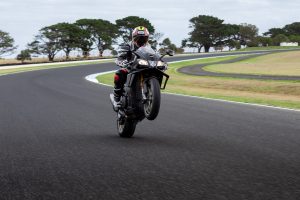 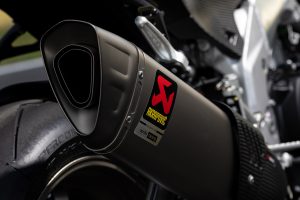 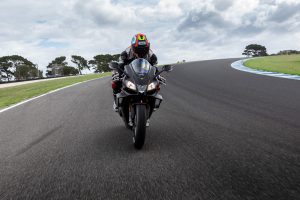 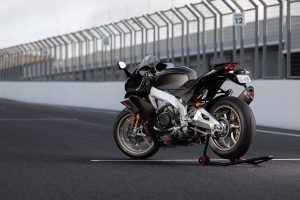 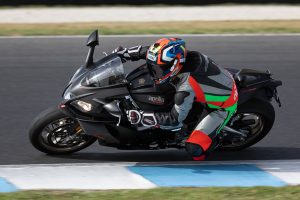 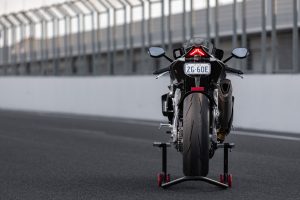 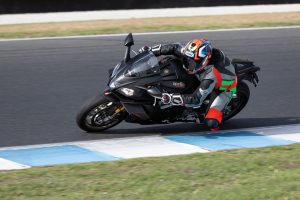 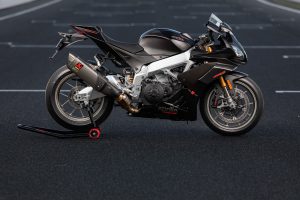 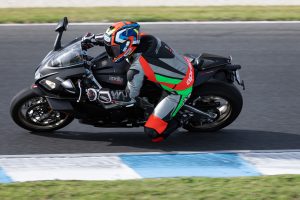 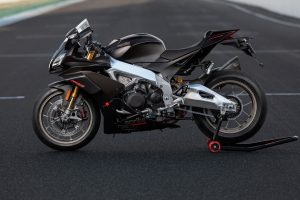