McAms Yamaha pilot salvages points at the second round of British Superbikes. 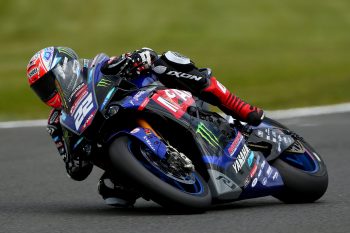 The McAms Yamaha contender suffered the injury while testing at the venue following Silverstone’s opening round, crashing slowly however landing awkwardly.

While acknowledging it wasn’t ideal to be racing with the injury, O’Halloran is satisfied to exit the weekend with points to his name following a disastrous DNF-DNF scorecard at the season opener.

“It’s good to score some points,” O’Halloran stated. “I was really happy with fourth in race one, but in race two I struggled a bit and ended up seventh. We had to salvage as many points as we could after not scoring at Silverstone, but it wasn’t easy as unfortunately last week at the test I had a small slip off at Hizzy’s and fractured my right humerus just near my shoulder.

“I haven’t said a lot about it as I wanted to keep my head down and everyone focused on what we were doing, but riding Oulton Park with a slightly broken bone is not ideal. We’ve got a few weeks now before Donington, so I’ll keep on with the therapy, get fit and healthy and hopefully be back to full fitness.”