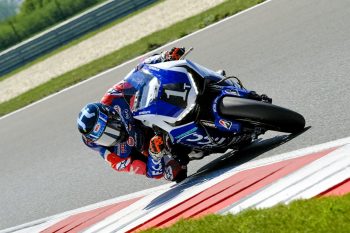 Australian Josh Hook has expressed a sense of satisfaction to overcome an early braking issue in the 8 Hours of Slovakia, ultimately finishing on the podium with F.C.C. TSR Honda France for round three of the 2018/2019 FIM Endurance World Championship.

The reigning world champion suffered an admittedly ’embarrassing’ moment while returning to pit lane when the brake malfunction caused him to lose the front end just metres from his garage, however the squad was able to rectify the issue and rebound for a valuable podium result

“I had a problem with brakes at the very beginning of my stint, it was complicated to manage it and pit-in especially when I fell in the pit-lane – [an] embarrassing situation but it is what it is,” Hook explained.

“Anyway, the technical staff did a good job, we got back on track and I believe we achieved good progression. We had good pace and good pace since the beginning of the tests, and all the conditions were here to mark some good points. I’m very happy of the final result.”