It’s a clever company that can make a bike exciting at all speeds, and while some companies struggle with the concept, thankfully Aprilia is on point with it’s 2019 Aprilia Tuono V4 1100 Factory. The bike has taken things to the next level making all the above even more real while being more comfortable with its own active systems at the same time. 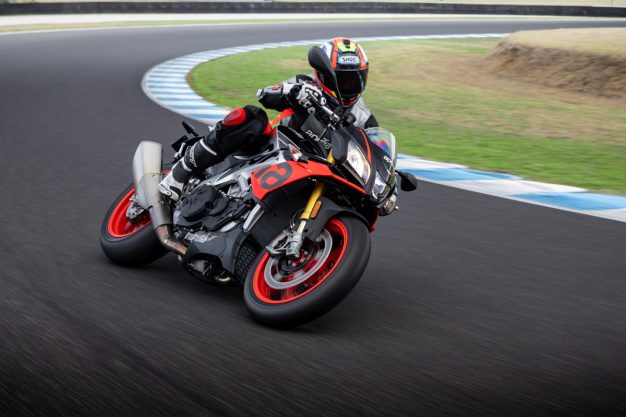 Where we rode:
Perfect conditions greeted us at Phillip Island for the launch of the 2019 Tuono V4 1100 factory. Being able to open the taps on the Tuono on a track like Phillip Island is pretty much heaven on a stick, a place where there’s plenty of run off and care free riding can be had all day long. The Island’s a great place test any motorcycle, especially when it comes to suspension and power. 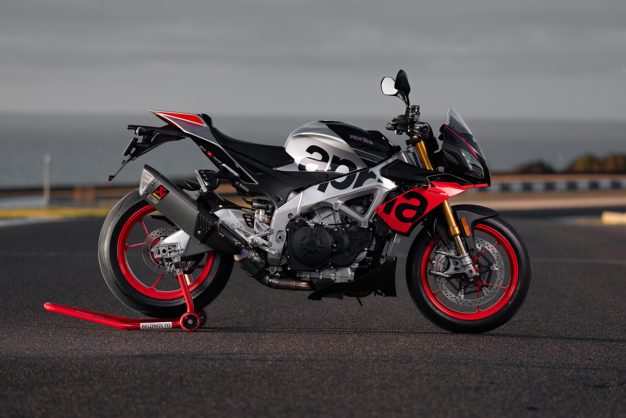 Technical features:
When you look at the 2019 version of the Tuono, the truth is it looks very like its predecessors. Similar lines and layout are what greet the eye. That’s not a bad thing though, because the Tuono it is still one of the best looking naked bikes around where performance matches its looks. It’s also one of the few naked bikes out there that has that effective small bikini fairing that stops buffeting rather effectively, especially at the rate of knots the Factory travels at. The big news for 2019 though is its improved electronics and the addition of ASC (Aprilia Suspension Control). Using Ohlin’s latest second generation EC2.0 system, the suspension now self regulates. It changes its settings automatically from sensor readings placed and dotted all over the bike. It’s job is to decipher the rider’s mood by measuring speed, throttle input, lean angle, braking force and a myriad of other parameters and then adjusting the clickers to suit on the fly. As an example, if you’re riding through traffic at a steady pace the system will soften everything off to give a smooth ride and extra bump absorption. Leaving the traffic behind though and time to get aggressive, the system in auto adjust mode will get stiffer and more race bike like. It’s amazing stuff, but is it a gimmick? No, it’s the future. 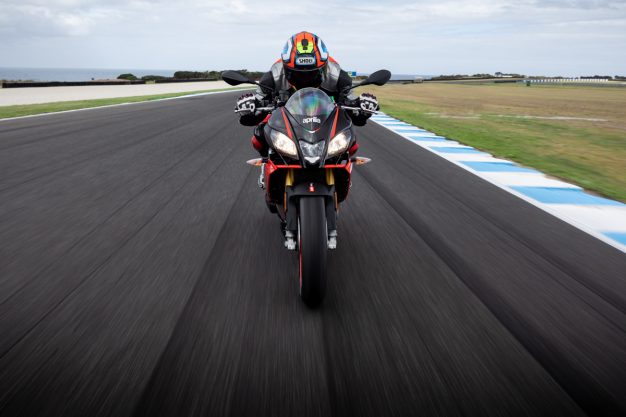 Motor characteristics:
There is nothing quite like the pulse, the torque or the feel of a V4, and until you’ve sampled one, I feel life’s incomplete. Aprilia has a vast knowledge of the V4, now having been playing around with them in all sorts of formats for over a decade. The longitudinal 65-degree V4 pumps out 175hp and is derived from the RSV4 engine which won the Superbike World Championship in the hands of guys like Max Biaggi and Sylvan Guintoli on multiple occasions. The place that it’s better than the others is that first touch of the throttle, there’s so much contact feel to the ground, so that even with all the power and torque it has and its super smooth delivery it’s easier to ride than ever. Magnetti Marelli, a name synonymous with racing takes care of keeping the motor humming as it should and the system is kept busy because there’s a lot to control. The main difference between this bike and most others is its two-twin throttle body set ups. They work independently and vary the power depending on the anticipated feel of the engine that the rider wants. In other words, they open at different rates adjusting the power and feel of the tyre on to the road. It’s not just a gimmick – all the MotoGP teams use similar strategies and its one of the reasons that the Tuono is so easy to ride under all road and track conditions. The engine feels so sweet at idle, it’s one of those bikes you want to start in the shed just to listen to and that’s with the standard exhaust. Now ,last year’s 1100 Factory was a sensational bike and this one has only gotten better. The electronics feel like a big improvement and work closer to a race spec machine. They work when they need to rather than cutting in early and that makes the 1100 a lot more fun on the track. It really is a great all-rounder with high quality touches bristling at every glance, but the big advancement for 2019 is its new active suspension. 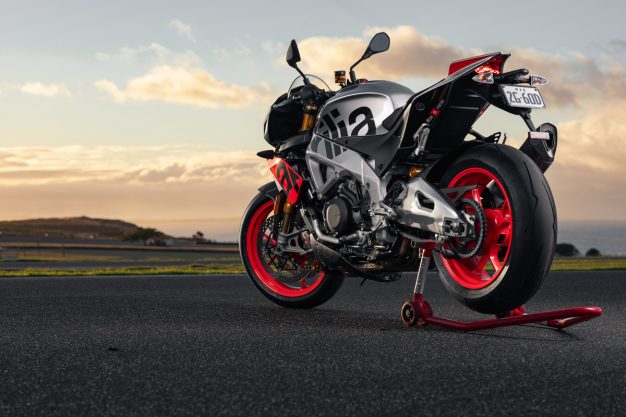 Chassis feedback:
If there was ever a bike that fitted me like a glove it is the Tuono V4 1100 Factory. I love the way that the bike is comfortable from the onset – the bars are just the right width, and there’s a real feel of being out in the open whilst still having the protection from the bikini fairing. Before I rode the Tuono, I had already done a session on the amazing new RSV1100RF, and that gave me a good reference point to judge the active Ohlin’s set up on the Tuono. The harshness of the race spec superbike was completely knocked away with the new system and it’s now such a comfortable bike to ride. I loved the way the bike feels plush at every speed and input as the damping controls are being constantly electronically dialled in to the correct settings. It meant that the bike felt soft but never went off line and ran wide, normally a paradox. The beauty is though that you can deactivate the system if you like and run it as a normal system or adjust it manually using the Ohlin’s built in technician system. That’s right, you tell the bike you want to be tighter on the exit and the right knobs get auto tuned to make that happen. You want more grip? And ditto, your on-board tech does all the hard work for you. There are plenty of menus to play with and everything is just so adjustable making it very hard to get bored of this bike. It literally has every system invented and they all play their part in making riding the Tuono an enjoyable experience. When it was time to bring the Tuono back in to the pit box I was smiling like a Cheshire cat, I don’t know how they keep making these big bore bikes better and safer, but they do. I found it hard to give the keys back. 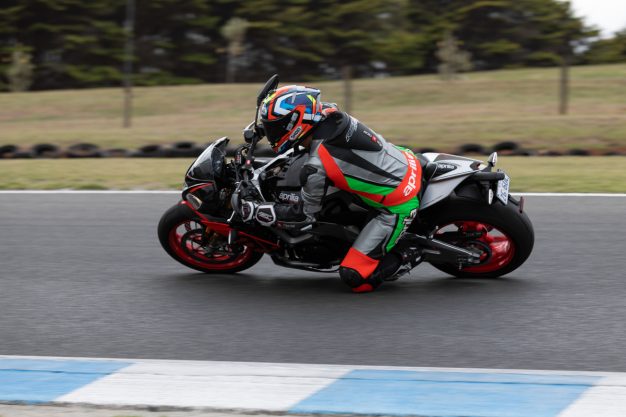 Final thoughts:
Right at the start I hinted that this Tuono is mostly like the old model, and it is. That however is not a reason to steer away from such an impressive machine. To change the shape for the sake of it and make it better looking would be a hard task to master, as this thing is already on point. The thing to remember if you are in the market for a Tuono or big bore naked is that this latest model is vastly improved from a couple year old model and overall vastly improved over the ’18 model when you add in the new automatic Aprilia Suspension Control. It dares to be different in many ways and if, and if being different is your thing, well this bike is as raunchy as it gets. 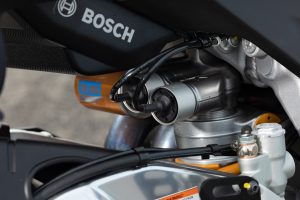 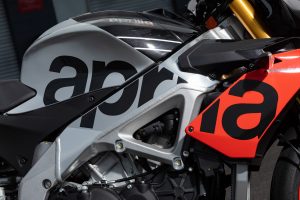 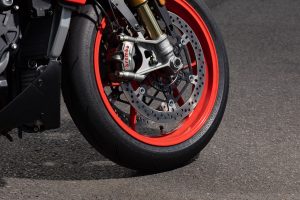 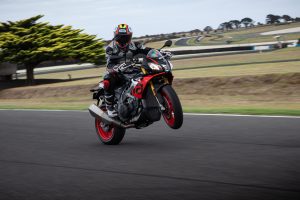 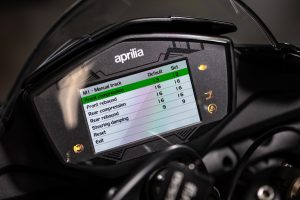 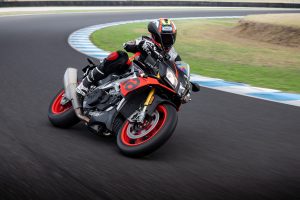 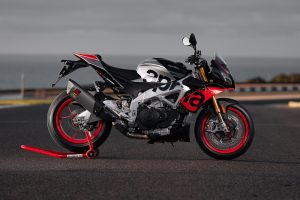 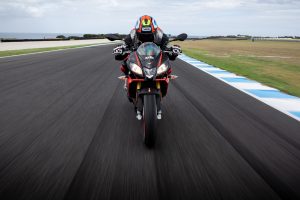 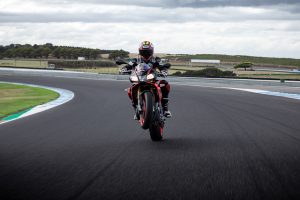 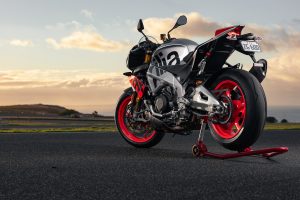 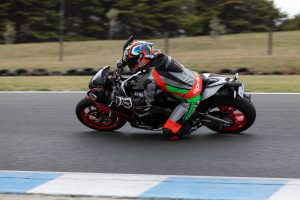 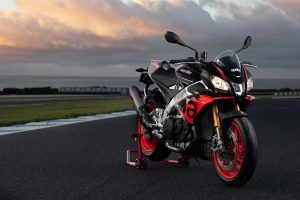