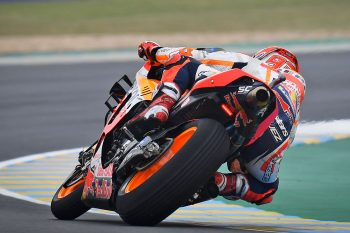 Question marks over which tyres to go with were obvious ahead of the green light and as the riders ventured out, only three riders gambled on slick tyres – Rossi (Monster Energy Yamaha MotoGP), teammate Maverick Vinales and fellow Yamaha man Fabio Quartararo (Petronas Yamaha SRT).

But it didn’t pay off as the rain started to fall slightly heavier at Le Mans, so the M1 trio came straight back into pit-lane to switch bikes.

Meanwhile, the riders who had gone for wets were busy getting their first lap-times on the board, and it was Marquez who went to the top of the standings after Petrucci and Miller had taken turns to go P1.

The Spaniard’s advantage was nearly 0.4 seconds as he set off on another hot lap but at turn six it came to an abrupt halt as the Repsol Honda rider slid out, trying his best to save it but it wasn’t to be this time around. Miller would also later crash.

Conditions were getting ever so slightly worse as the rain continued to fall and Q1 graduate Rossi was now out on wet tyres, gradually climbing his way up the timing screens as the field struggled to improve on their personal best laps.

Marquez stayed out after his crash but the championship leader wasn’t able to find any more time, with Rossi one of the only riders to find some, the 40-year-old jumping up to fifth on his final flying lap and set to line up alongside Andrea Dovizioso (Ducati Team).

Closing out the second row is Franco Morbidelli (Petronas Yamaha SRT), who was the last rider within a second of Marquez, ahead of Takaaki Nakagami (LCR Honda Idemitsu), who heads row three despite suffering his first crash of the season.

He has Jorge Lorenzo (Repsol Honda Team) alongside him as the number 99 had his best qualifying yet on the Honda. The six-time Le Mans winner was one who, like Rossi, was able to improve despite the worsening conditions. Aleix Espargaro (Aprilia Racing Team Gresini) was next up in P9 and that was another notable result – the Noale factory’s best of the season so far.

Home hero Fabio Quartararo (Petronas Yamaha SRT), meanwhile, looked disappointed with 10th, but it’s an impressive result for the rookie as he had to get very quickly accustomed to a MotoGP machine in the wet. The Frenchman will start ahead of Vinales too after a disaster for the Spaniard. 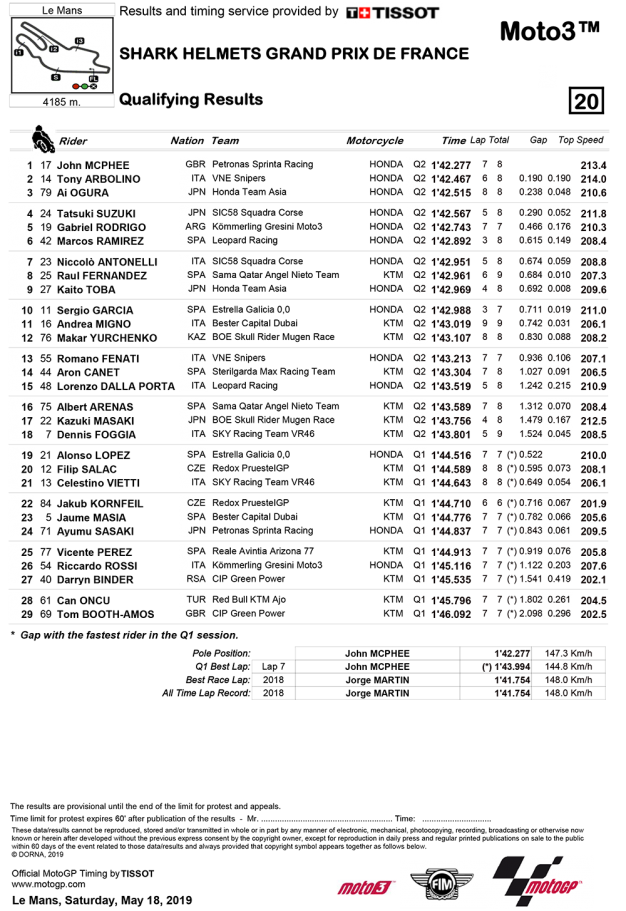