Australia's Miller just short of another podium with inspired fourth-place. 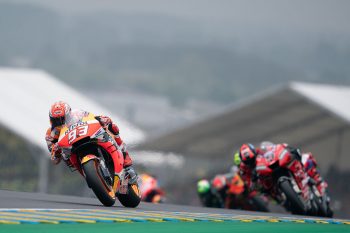 It was a history-maker of a day for reigning champion Marc Marquez (Repsol Honda Team) in France, taking Honda’s 300th premier class victory, as well as equalling the premier class win count of teammate Jorge Lorenzo.

Behind Marquez it was a Ducati duel for the podium, with Andrea Dovizioso (Ducati Team) just able to hold off teammate Danilo Petrucci over the line. Dovizioso equals the podium tally of MotoGP Legend Mick Doohan across all classes, Petrucci took to the rostrum for the first time for the factory Ducati Team.

As the lights went out, poleman Marquez and second place Petrucci immediately went toe-to-toe into turn three, with the number 93 just getting the better of the Italian as everyone made it through the tricky left-right in one piece. It was the top three on the grid who held the top three positions in the race, and Marquez started to edge out a half-second gap on the field.

But Jack Miller (Pramac Racing) was on the move. He forced his way past fellow GP19 rider Petrucci and immediately locked his radar on the back of Marquez’ Honda. And it wasn’t long before the 0.5s gap was bridged as Miller slammed in the fastest lap of the race before chucking it up the inside of Marquez at turn three on lap five.

Two laps later Marquez went to return the favour and both riders ran slightly wide, Miller getting the cutback to lead but Marquez sweeping up the inside of the Ducati, as Dovizioso and Valentino Rossi (Monster Energy Yamaha MotoGP) joined the fray at the front.

With Marquez back in the lead though, he began to get into a rhythm. A tenth here and a tenth there slowly stretched the gap out to half a second as the Spaniard posted the fastest lap of the race and it was hammer down for the championship leader.

The gap to Miller and Dovizioso kept on rising and as Marquez ticked lap 14 off, it was over a second and it soon became a race for second between the three Ducatis, with Valentino Rossi (Monster Energy Yamaha MotoGP) not completely out of the equation but back in fifth. With 11 to go Marquez was two seconds up the road as Dovi made his move past Miller, the Australian running wide at turn seven as Petrucci began to build up his speed and close down the podium places.

A few laps later, the number nine was past Miller and setting his sights on his teammate. With five laps to go Petrucci struck for P2 but ran wide and the duel would continue – but Dovizioso kept on getting it back. Meanwhile, Marquez had built up nearly a four-second gap as he cruised round to claim his third win of the season in dominant style, equalling Lorenzo’s premier class win tally at 47, which is joint fourth on the list.

Although no match for Marquez on the day, Dovi took an important second for 20 more points and Petrucci returned to the rostrum for the first time since Le Mans last season. Miller held off Rossi by a tenth to earn a solid fourth in France, ‘The Doctor’ not quite able keep tabs on the podium battle and coming home fifth.

Just behind him, meanwhile, was a big contender for ride of the day – the best result of the season so far for Red Bull KTM Factory Racing and Pol Espargaro. The Spaniard had looked strong all weekend and he proved it in the race, taking an awesome sixth place and over a second ahead of the next man up, Franco Morbidelli (Petronas Yamaha SRT).

Home hero Fabio Quartararo (Petronas Yamaha SRT) eventually crossed the line in P8, followed by Cal Crutchlow (LCR Honda Castrol) who lost out to Quartararo in the latter stages, and Team Suzuki Ecstar’s Alex Rins. A P19 start hampered the Spaniard’s French GP as he slips from second to third in the standings. Lorenzo earned his best Honda result in 11th.

It’s been a long time coming, but in Moto2 Alex Marquez (EG 0,0 Marc VDS) was back on the top step at Le Mans to end a win drought stretching back to Japan 2017 and he did it in style. Over a second clear over the line and untroubled for much of the race, he led Jorge Navarro (Lightech Speed Up) and Augusto Fernandez (Flexbox HP 40). Australian Remy Gardner (ONEXOX TKKR SAG Team) crashed out of sixth around halfway.

Moto3 saw John McPhee (Petronas Sprinta Racing) take his second GP win, with the Scot fighting it out at the front and then able to defend the lead in the final sector to cross the line just over a tenth clear of Lorenzo Dalla Porta (Leopard Racing) and Aron Canet (Sterilgarda Max Racing Team), who extended his championship lead. 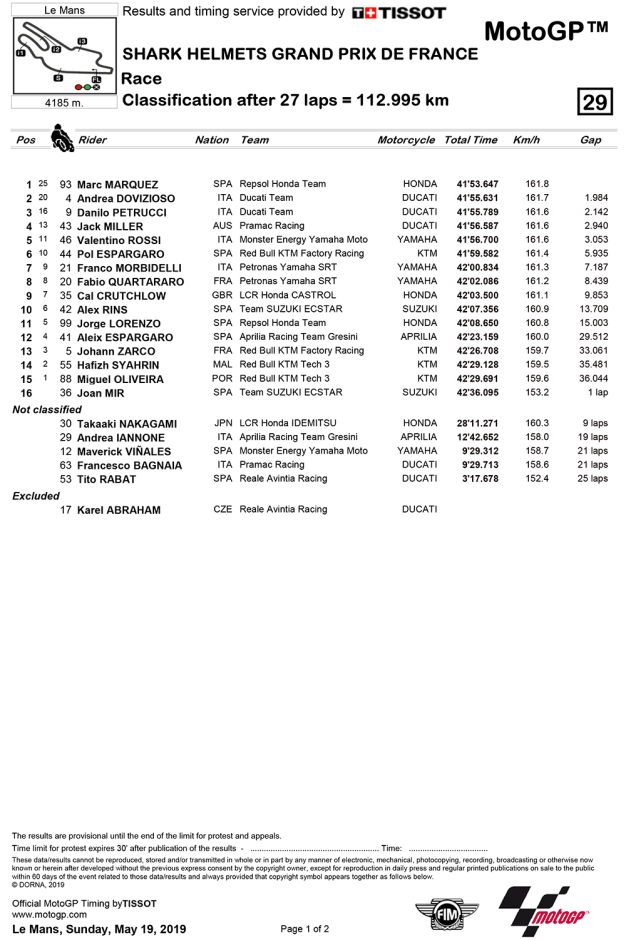 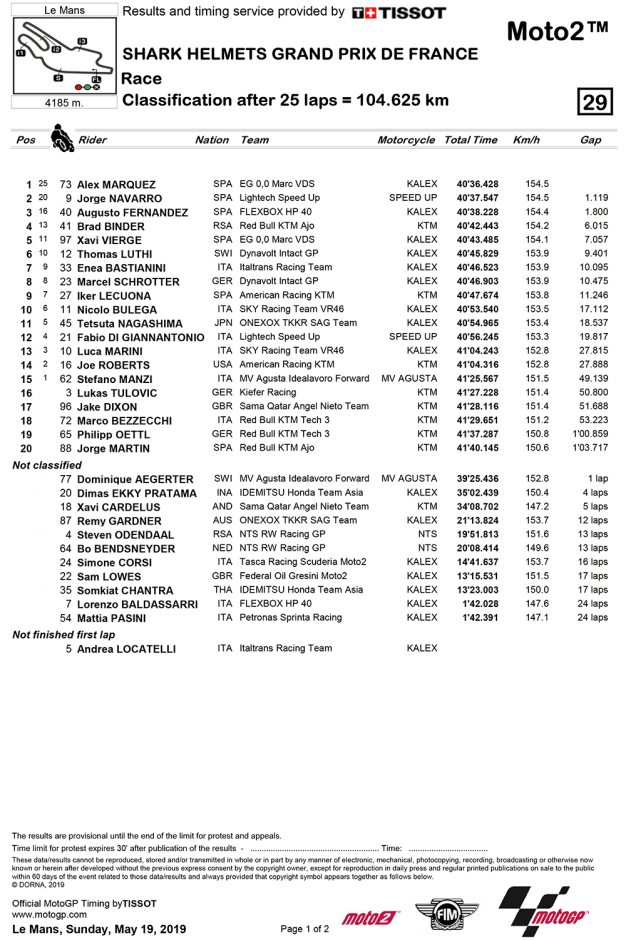 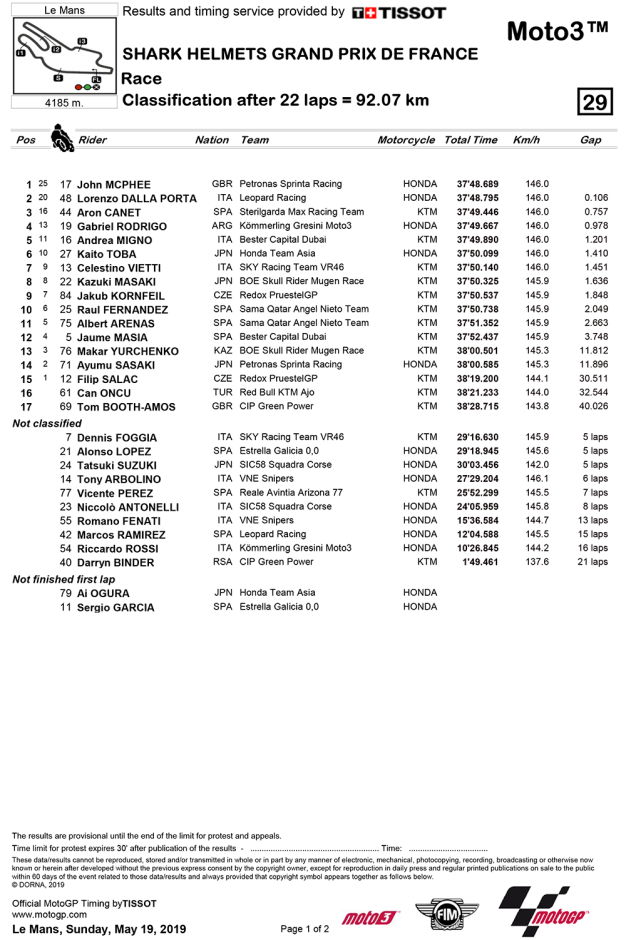