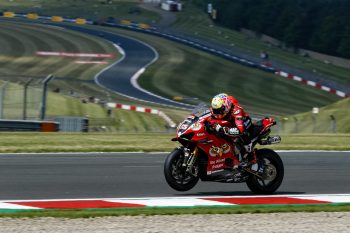 After earning pole position, Australian Josh Brookes has declared his results at Donington Park’s third round of the 2019 Bennetts British Superbike Championship (BSB) are less than acceptable.

The triple-header round saw the Be Wiser Ducati ace crash out of the opening encounter with a frightening high-side, however Brookes endeavoured to make amends in Sunday’s pair of races, notching up a 4-4 scorecard.

“Finishing in fourth and fifth isn’t what we go racing for and the results have been disappointing today,” Brookes stated. “Everything felt like it was going to plan in the first race and I was catching the leaders but just after mid-race, I lost both grip and a bit of performance with the bike whilst I also eased off a bit more than some of the other riders when the rain began to fall.

“In the second race, I got sucked in a bit when I was in the draft of Scott and made a mistake going into the chicane which obviously lost me a lot of time. After that it was damage limitation so the results, for me personally, have been less than acceptable so we’ve got some work to do ahead of the next round.”

All three outings were taken out by former MotoGP rider and Brookes’ teammate Scott Redding, as Australian Jason O’Halloran (McAms Yamaha) recorded 5-7 results before crashing out of the final encounter.