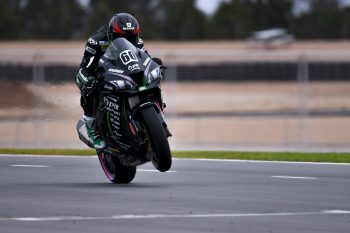 Current ASBK points leader Bryan Staring will continue to fill in for Thitipong Warokorn at Kawasaki Thailand Racing Team in the Asia Road Racing Championship (ARRC) this weekend as the series returns to action at Chang International Circuit in Thailand.

Staring contested The Bend Motorsport Park’s second round, which was run in conjunction with round three of ASBK, where the Wester Australian put on a commanding display to record 1-2 scorecard in ARRC and a dominant 1-1-1 results sheet in the domestic series.

“I’ll be headed to Thailand this week to compete in the third round of the Asia Road Racing Championship with the awesome crew at Kawasaki Thailand Racing Team at Chang International Circuit,” Staring confirmed. “Racing together was a stack of laughs in Adelaide. Thanks to Kawasaki Motors Australia and Kawasaki BCperformance for supporting me in this opportunity.”

The number 67 was initially slated to contest just the South Australian round of the series, however with an extended break in ASBK, Staring has utilised the opportunity to remain sharp before the Australian series resumes on 5-7 July at Morgan Park in Queensland.