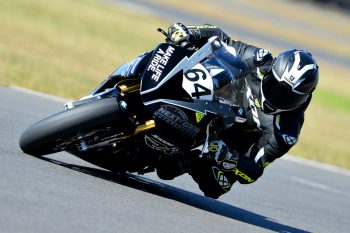 Maxima BMW has drafted in Aaron Morris for Morgan Park’s fourth round of the 2019 Motul Pirelli Australian Superbike Championship (ASBK), scheduled for 5-7 July in Queensland.

Morris tested with the Next Gen Motorsports-operated outfit at Morgan park earlier this month aboard the BMW S 1000 RR, earning himself a spot on the team in what is understood to be a one-off appearance alongside regulars Glenn Allerton – should he recover in time from injury – and Ted Collins.

“I’m extremely grateful that both Wayne [Hepburn] and Shane [Kinderis] have decided to give me a go for round four,” said Morris. “I’m not really setting any goals, as such. Of course, I want to win – everyone wants to win.

“I know I’m racing a very competitive motorcycle and of course on the best tyres, being Pirelli. So, it will all be down to what I can do on track. I’m just so excited to get the round underway.”

Team manager Wayne Hepburn added: “It goes without saying that Aaron impressed both Shane and I with how he performed a few weeks ago. We always knew he was going to be fast, but it was his attitude and his way he gave feedback about the bike is which impressed us the most.

Morris has only completed one round in the premier class domestically, contesting the opening stop of the 2018 ASBK at Phillip Island, lodging a 6-10-10 scorecard for ninth overall.