Ducati ace to mark milestone at home Italian round this weekend. 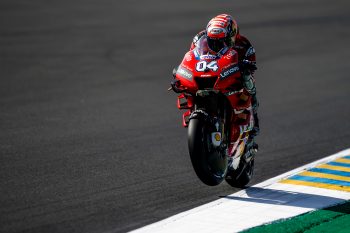 Mission Winnow Ducati’s Andrea Dovizioso will celebrate his 300th grand prix this weekend at Mugello’s sixth round of the 2019 MotoGP World Championship in Italy.

Dovizioso, who started his full-time grand prix career in 2002, has contested 49 races in the both the former 125cc and 250cc classes, and a staggering 201 races in the premier category since graduating to MotoGP in 2008.

The milestone will be made even more special this weekend, as Mugello plays host to Dovizioso’s home round and will deliver a passionate Italian crowd to mark the occasion.

“300 is a big number,” Dovizioso stated. “I’m really happy to be in Mugello at this moment in the Championship because it’s for sure our good track, and we need a good result. I think after a good result in Le Mans with three Ducatis, we can be really competitive here to fight with Marc.

“For sure he’ll really want to win here in Mugello but I think we have every chance to fight with him and all the other riders. This is our home race and I believe we can be competitive and fast, so our goal is first of all to step on the podium once again.

“As we’ve seen in these first races, this year our rivals are also particularly fast, so it’s difficult to make predictions. As for us, we will not settle for what we achieved so far and we’ll try our best, analysing the data, to keep working and understand where we can make further improvements.”

With one victory to his name this year, Dovizioso is ranked second in the championship standings.