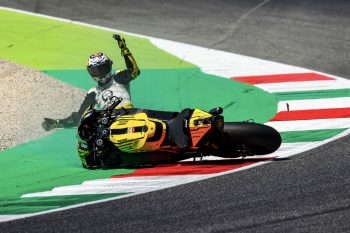 Australian Jack Miller says it was heartbreaking to crash out of Mugello’s sixth round of MotoGP on Sunday after putting in a strong performance throughout the opening half of the 23-lap outing.

Qualifying in P5, the Pramac Racing contender challenged in the lead group, setting the fastest lap of the race before crashing out with eight laps to go as he attempted a pass on Team Suzuki Ecstar’s Alex Rins.

“For most of the race we really conserved the tyres through the corners, and I saw already with 10 laps to go that Danilo [Petrucci] and Marc [Marquez] were already pushing quite a lot through there and starting to spin a little bit more.

“They made a little gap to me so I said, ‘okay, now they are going to start to push’. The next lap, I did the fastest lap of the race, catching them back. I wanted to pass Rins at turn one, I just was not quite close enough, it would have been a little risky, so I just was waiting.

“Rins had a big slide on the entry into turn four and I braked a little harder in the first moment and released the brakes a little bit earlier, and as I released them, the front went, I tried to save it on my elbow, but it was impossible today.

“[It was] a heartbreaking end to a really strong race but this is how it is, and we are again fighting for the victories so we can be happy about that, but it was missing about eight laps.”

The DNF sees Miller positioned sixth in the championship standings as MotoGP heads to Catalunya in Spain for round seven, scheduled for 16 June.