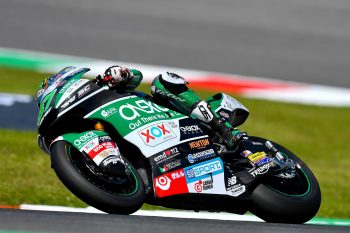 Labelling the opening moments of Sunday’s Moto2 encounter as ‘crazy’, Australian Remy Gardner was able to recover for a points-paying 13th position at Mugello’s sixth round of the world championship.

Starting from P10 on the grid, Gardner immediately lost 10 positions in the first corners of the circuit as chaos unfolded, with his campaign only worsened after the steering damper from his teammate Tetsuta Nagashima worked its way loose from his SAG Racing machine, collecting Garnder’s foot in the process.

The Australian pushed on despite suffering pain from the incident, mustering up a charge to cross the line in P13, enabling him to maintain a top 10 championship ranking.

“I was pretty angry after qualifying if I am honest,” Gardner declared. “I just couldn’t find any space and with the collarbone injury it was hard to change direction, but I was confident for the race. The race though wasn’t good – the first three corners every was riding crazy and I lost 10 positions which was really unfortunate.

“We gambled with a setting that didn’t work and my team mate Tetsu’s steering damper fell off and hit me on the foot. It’s extremely sore right now but thankfully not broken. I raced the last three quarters of the race with pain in my foot and with a collarbone that is still not 100 percent.

“At least I was able to claw my way back to 13th and get three points. We are still looking decent in the overall standings and I am sure we can do a great job for the rest of the season.”

The Moto2 World Championship now head to Catalunya in Spain for round seven, scheduled for 16 June.