Riders and personnel share their thoughts on the Catalan grand prix incident.

It was the incident that made headlines at the Catalan grand prix, where Jorge Lorenzo (Repsol Honda) crashed in the early stages following a critical error, which saw Andrea Dovizioso (Mission Winnow Ducati) and Monster Energy Yamaha MotoGP duo Maverick Vinales and Valentino Rossi taken down in the carnage. In this instalment of The Point, a selection of riders and personnel chime in on the incident. 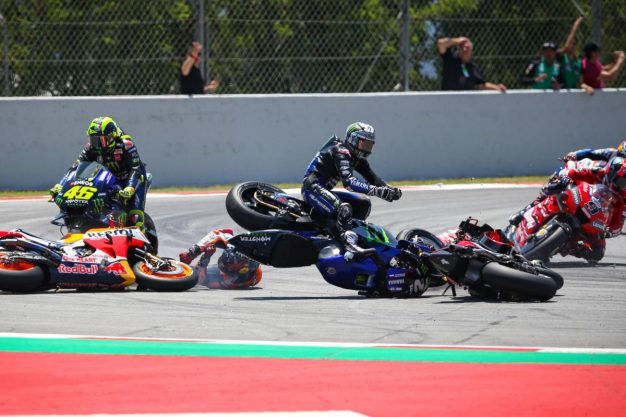 Jorge Lorenzo (Repsol Honda):
You don’t have any options if you brake a little bit too late here, like happened with me. It was my fault, my mistake and I apologise. It was really unfortunate to take out Dovi, Maverick and Valentino – it wasn’t their fault obviously, it was mine. The only thing that matters today is the crash, I took out three riders unfortunately but if we think aside from this it was a weekend where we were able to make a step forward and I was consistent throughout

Maverick Vinales (Monster Energy Yamaha MotoGP):
Actually, I saw someone coming very fast on the inside, and I tried to pick up the bike to avoid a crash. Dovi was in front of me and I thought that just they were going to crash, but unfortunately they touched my rear tyre and I jumped. I couldn’t avoid it and I’m really disappointed, but on the other hand I’m really happy. We’ve made a good start and did some good first laps. Who knows what would have happened if I could have followed Marc? But the bike was working well and the team was doing an excellent job this weekend, so we need to keep working like this.

Andrea Dovizioso (Mission Winnow Ducati):
After a great start, I took the lead and I was in a strategic position to ride the race we had planned. The rear tyre still wasn’t perfectly heated up so I wasn’t pushing the pace yet but, considering how the race eventually unfolded and the rhythm shown by other riders, I believe we could have been contenders for sure. I prefer not to comment about the incident, but the race still was entirely up for grabs at that point. 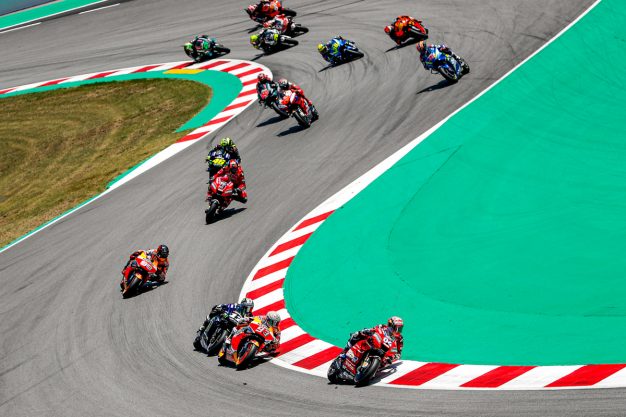 Valentino Rossi (Monster Energy Yamaha MotoGP):
This is a great shame, because we did a good weekend. We worked well during the practice sessions and we also made a good tyre choice. I felt really comfortable on the bike and I had a good pace already this morning, but it looked like this afternoon it was even better. I was very optimistic, but unfortunately in that corner I tried to overtake Petrucci and I already arrived a bit fast. At the same moment the crash in front of me happened, so I couldn’t avoid the bike of Jorge and I crashed. It’s a great shame, because I could have done a good race. I felt strong.

Alex Rins (Team Suzuki Ecstar):
I’m a little bit disappointed with my result because I felt I could have a really good result this weekend – but on the other hand, considering I had some problems during the race, it’s not a bad result. It was a complicated and difficult race and it was a shame to see the crash between Lorenzo and the others, especially as it gave Marquez even more of an advantage.

Massimo Meregalli (Monster Energy Yamaha MotoGP director):
It’s a very disappointing and difficult to accept end to an otherwise good weekend for our team. It’s especially cruel because there was nothing Vale and Maverick could have done to avoid it, and we were quite confident that we would be able to get a good result here today. We definitely started the race with a completely different aim than the outcome we got. It’s very unfortunate, but grand prix racing isn’t always fair. All we can do is look at the positives. Both our riders were in the mix to fight for a podium.