Immediate effect for Kawasaki riders in the Supersport 300 class. 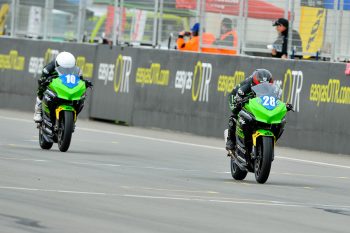 All competitors must now have their ECU reprogrammed by having the rev limiter set prior to taking part in any competition, where it has been determined an increase of the original restricted rev limit of 9650rpm to now 10,300rpm.

After the first three rounds of ASBK, the ASBK management team has reviewed the regulations governing restrictions applied to the Kawasaki Ninja 400 and have approved the new changes.

MA will continue to monitor the performance of all machines within the Supersport 300 class and will alter the regulations from time to time to ensure fair and even competition within the class. This regulation change marks the second update this season. Morgan Park in Queensland will host the next round of ASBK on 5-6 July.