Bautista not dwelling on season-first blemish ahead of Misano

Spaniard aiming to bounce back this weekend in Italy. 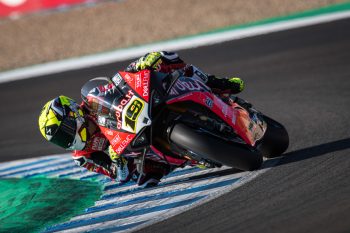 Points leader Alvaro Bautista says he isn’t dwelling on his season-first blemish from the previous round in Jerez as he looks to return to his winning ways this weekend at Misano’s seventh stop of the 2019 Motul FIM Superbike World Championship (WorldSBK).

The Aruba.it Racing – Ducati ace crashed out of the final encounter in Spain, recording his first non-finish in what has been a dominant start to his rookie season.

The Spaniard recently tested at the Misano venue in Italy, and although conditions weren’t ideal, he believes the track time provided valuable references for this weekend’s event.

“It was a pity about my crash at Jerez, but as I said at the time, that’s racing, so there’s no point in dwelling on it too much,” Bautista explained. “Now we look forward to the next race in Misano, where we did some tests a few weeks ago.

“Although the conditions weren’t great, we managed to get some references for this weekend. I’m looking forward to trying to keep the same feeling with the Panigale V4 R and continue the good work we’ve done so far. Misano is a second home race for the Aruba team and Ducati, and we will for sure have a lot of fans to support us.”