Kagayama, Guintoli and Watanabe named in three-man team for 2019 edition. 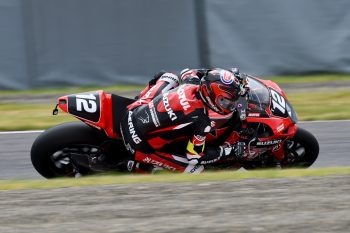 Yoshimura Suzuki Motul Racing has revealed Yukio Kagayama, Sylvain Guintoli and Kazuki Watanabe will make up its squad for the 2019 Suzuka 8 Hours in Japan on 28 July, which will mark the final round of the 2018/2019 FIM Endurance World Championship (EWC).

The team was in contention for victory in 2018, however a crash hindered their efforts, ultimately finishing the prestigious event 10th in the classification.

“I am very excited to join the Yoshimura team again this year for the Suzuka 8H since some of my best racing memories is from the Suzuka 8H,” said Kagayama. “In 2007 to get on the podium in first place, and it was such an amazing experience.

“As it is very well known, Suzuka is extremely hard, competitive, very hot and a changing race event. I know how to fight this race from my experience, and I am excited to get going with my mates and see what I can do. I’m really looking forward the race weekend and aiming for the top step with Yoshimura Suzuki MOTUL Racing again this year.”

Sylvain Guintoli added: “It’s a great pleasure and an honour to be back in Japan for the 2019 Suzuka 8H with the Yoshimura Suzuki Motul racing team.

“Last year we had a promising start of the race, leading for a while and maintaining our place in the top-3 before a crash that forced us to fight all race to recover places. I hope this year we can have a trouble-free race and fight for the podium all the way.”