Recovery time from broken wrist still to be determined. 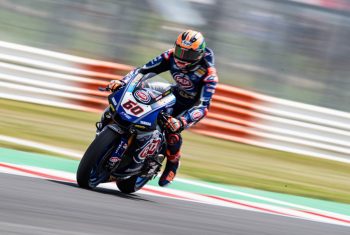 Dutchman Michael van der Mark is recovering from his frightening crash during Friday practice at Misano’s seventh round of the 2019 Motul FIM Superbike World Championship (WorldSBK), and is set to undergo surgery.

The Pata Yamaha WorldSBK rider, who topped the timesheets on Friday before violently highsiding, fractured his right radius in the fall, which will be plated when he goes under the knife.

Van der Mark was also thought to have numerous fractured ribs, however further medical examinations have confirmed the are in fact bruised.

“When you see an accident as severe as Michael’s today, it really brings home the risks that all the riders take when they are pushing to the limits,” said Pata Yamaha team principal Paul Denning.

“Thankfully he is ‘basically’ okay, despite injuries that will rule him out of the races. Of course, this is a huge disappointment for him, the team and for Yamaha because – following Jerez’s superb victory – Michael’s outright pace and consistency here in Misano had set him up to again challenge for the race wins.”

Van der Mark’s return to racing will be determined following surgery, where his recovery will be continued to be monitored.