Haslam surges into form with double podium at Misano 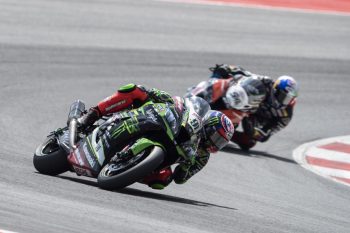 Haslam, who crashed out of the opening encounter on Saturday, rebounded strongly for the Superpole race and race two despite being unable to find an ideal feeling, earning his first podium finishes since the season-opener at Phillip Island.

“The third place in the sprint race today was just a matter of staying on and bridging the gap to Tom Sykes, and I managed to pass him on the last lap,” said Haslam. “This afternoon I was struggling from lap one and did not have much front feeling, but I think everybody was in the same position.

“When Johnny and Toprak came past I felt I could have pushed to go with them but I had already risked too much so I had to run my own race. Alex was then behind me and I did not want to give up the podium, so I fought a little bit at the end. We have made some good steps from the Jerez test but there are little things we are still finding out.”

The British contender is currently positioned fifth in the championship standings as the series returns on 5-7 July at Donington Park in the United Kingdom.