Rea ‘unsure of the pace’ in Misano race two victory 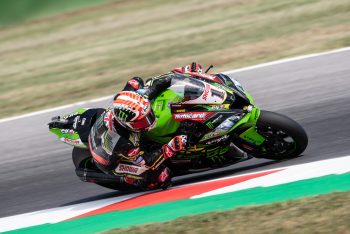 Four-time reigning champion Jonathan Rea says he was unsure of the pace in Sunday’s final WorldSBK encounter at Misano, describing it as slow while the field battled tough track conditions.

Rain from the day prior combined with warm temperatures on Sunday saw riders battle for grip in the Superpole race – which Rea crashed in – and race two, the Kawasaki Racing Team ace ultimately coming out on top to capitalise on a mistake from points leader Alvaro Bautista (Aruba.it Racing – Ducati), reducing his lead to just 16 markers.

“Winning two races at Misano was good for us, especially the two important races,” said Rea. “I was very unsure of the pace. I felt like it was slow but I did not want to push any faster. I saw Alvaro go down very early in the race and the conditions out there were very tough, especially for the front tyre.

“The rear was just not digging in and going forward, it was just spinning so much – but we won, which was the main thing. It was a super-nice day for Kawasaki because we put three bikes on the Race Two podium. Team Suzuka! Donington next and we will go to every track with an open mentality.”

Donington Park’s eighth round of WorldSBK is scheduled for 5-7 July in the United Kingdom.