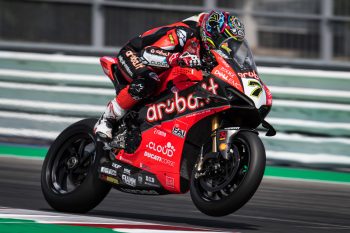 The British ace crashed in the Superpole race and charged through to seventh in race two, however despite adjusting his style for the challenging track conditions, he failed to find a feeling that would allow for a stronger result.

“It has been a difficult Sunday for me,” Davies reflected. “I lost the front in the Superpole race in turn 14, and as a result didn’t get the chance to start in the top nine for race two. Then we made some changes for race two, but they didn’t give us the step we needed.

“It was a critical racetrack today because grip was low, but it was the same for everyone. I just felt like I’ve got no adaptability with the bike, even though I tried to change my style during the race.

“It’s a bit frustrating to finish races like that, because I know we can do better than that. We just need to learn from the information and work hard in the areas that are letting us down at the moment.”

Davies is ranked eighth in the championship standings as the WorldSBK series returns to action on 5-7 July at Donington Park in the United Kingdom.