ASBK number one hopeful of the opportunity to compete in Japanese classic. 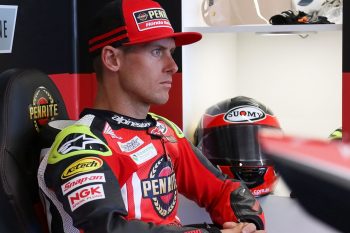 Defending Australian Superbike champion Troy Herfoss is in line to join the high-profile KYB Moriwaki Racing team at next month’s 2019 Suzuka 8 Hours in Japan following a successful test with the Japanese organisation this week.

Herfoss cut short a shakedown with Penrite Honda Racing at Morgan Park in order to travel to Suzuka for the test, aiming to join Japanese duo Yuki Takahashi and Tomoyoshi Koyama for this year’s final round of the Endurance World Championship.

“It was pretty exciting to ride the bike because I’d say it’s definitely the best package I’d ever ridden,” Herfoss told CycleOnline.com.au. “It was so responsive, the engine was really strong and also, just to get a chance to ride with Moriwaki was an honour, because a lot of Australians have been there and raced with the Moriwaki family over the years.

“They have a rich history at the 8-Hour, so I’m praying I can get a spot with them for the race – it’d be good to go back with them and to do the race for another year if possible. My consistency from last year is what they were looking for, so the test was pretty brief for me.

“I only got a couple of flying laps on the first day and then, basically, it was myself and another rider testing for the third rider position on the team. They sent us out for a half race stint to see how we’d go with the Pirelli tyres in the heat, because there is a lot of change as the race goes on. It was about who could handle that and stay consistent through the traffic.”

Suzuka has been a constant date on Herfoss’ schedule during recent years and last year saw him claim seventh overall as part of the Honda Asia Dream Racing team. Stepping up to the Moriwaki Racing effort would further boost his chances of a top five or potential podium result in July.

“For me, it’s the best chance I’ve got to measure up with some of the best riders in the world on competitive machinery,” he added. “I’ve sort of climbed the ladder over the years and last year was really good with the Team Asia bike when we finished seventh, so if I can secure a ride with Moriwaki I see it as another step forward. It’s a race that I really enjoy and I’d love to be on the podium once in my career.”

If he does receive the call-up to race, Herfoss won’t be the lone Australian championship contender on the grid, since former title winner Josh Waters will form part of the Team MotoMap SWAT Suzuki team alongside Nobuatsu Aoki and Dan Linfoot.