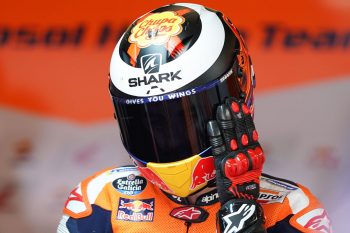 Spaniard Jorge Lorenzo has been ruled out of this weekend’s Assen TT in the Netherlands, the Repsol Honda rider injured in a major fall during FP1 on Friday morning.

Lorenzo’s weekend was cut short by the incident at turn seven that saw him fracture his T6 and T8 vertebrae and he will also be forced to miss next weekend’s German grand prix at Sachsenring.

“Due to the fall, I fractured both my T6 and T8 vertebrae,” Lorenzo explained. “The injury does not allow me to race here in Assen or at the Sachsenring. Tomorrow morning I will fly to Lugano and do all the possible treatments to get ready to go to Brno.”

It’s another disappointing blow for the five-time world champion, who was hopeful that updates including a revised fairing delivered by Honda Racing Corporation for Assen would have helped him move forward this weekend.