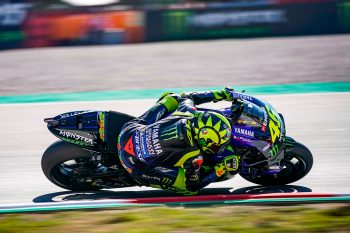 A third non-finish in three races has spelt a horror run for nine-time world champion Valentino Rossi after crashing out of the Assen TT.

The 40-year-old was working his way forward from 14th on the grid when he took Japanese rider Takaaki Nakagami down at turn eight on lap five.

It was Monster Energy Yamaha’s Rossi who crashed and took the LCR Honda rider down with him at high speed, putting both out of the race in its early stages. The Italian at fault has apologised to Nakagami.

“I was quite fast, so I tried to recover some positions,” Rossi reflected. “I was battling with Nakagami and I tried to overtake him entering turn eight, but I was a bit too much off the line I think.

“When I entered the corner, I lost the front and unfortunately I also took out Nakagami, so that’s a great shame and I have to say sorry. It was a mistake and a pity, because today, after being slow this weekend, we had found something, so during the race I was good.

“I felt good with the bike, so, on one side this makes it an even bigger shame, but on the other side it’s also important to realise that I was suffering too much this weekend and that we need to be stronger.”

Sunday’s DNF has Rossi fifth in the standings, now 88 points in arrears of points-leader and defending champion Marc Marquez (Repsol Honda). It’s now been two years since Rossi’s last win, which came at the Dutch GP in 2017.