Former champion lodges 8-4 scorecard at round five of British Superbikes. 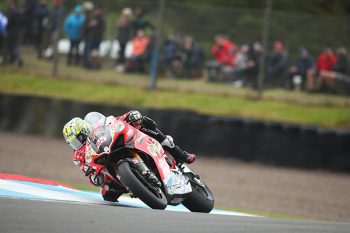 Australian Josh Brookes admits he struggled to make things click at Knockhill’s fifth round of the 2019 Bennetts British Superbike Championship (BSB), however he was able to salvage valuable points to retain third in the series rankings.

The Be Wiser Ducati rider started the weekend strongly in the opening practice sessions, however a P15 qualifying result followed by an 8-4 scorecard ultimately left the former champion dissatisfied with the weekend’s efforts.

“To be honest, I’m glad to be leaving Knockhill as it hasn’t been a great weekend and I’m disappointed for the whole team as everyone’s been working hard and putting in as much effort as always,” Brookes explained.

“It just hasn’t clicked for me this weekend and although it started well on Friday, it came to a halt after that and we never really progressed with our pace stuck at that level. The weather made it tough although it was the same for everyone, but we made some small improvements for the second race and salvaged a half decent result with fourth.

“I wish we were going to Snetterton straightaway to clear my head but it’s been a good circuit to me in the past and I’m confident the Be Wiser Ducati will work well there so I’ll be looking to bounce back strongly and get back to the front.”

The British Superbike Championship now heads to Snetterton on 19-21 July for round six of the 12-stop series.