Spaniard crashes out in early stages of Dutch grand prix. 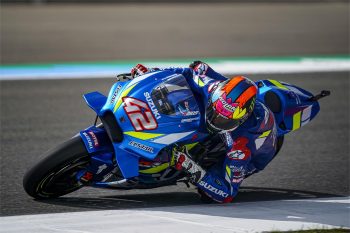 Starting from the front row, a regretful mistake in the opening laps of Sunday’s MotoGP encounter at Assen saw Alex Rins’ hopes of a promising result come crashing down.

The Team Suzuki Ecstar rider braked heavily into turn nine with 24 laps still to go, losing the front end to ultimately rule him out of the eighth round in the MotoGP World Championship.

“I did a really good start, and I was riding with a lot of confidence,” Rins commented. “But then, on the exit of turn eight, the front came up a little bit more than usual and then I braked really hard getting into turn nine and I lost the front immediately.

“It was a real shame because I was doing well, with a good rhythm and good pace. I’m sure I would have stayed with the front riders. The good news is that I’ll be back on the bike in less than a week, at Sachsenring, and I’m really excited.”

The Spaniard is ranked fourth in the championship standings as the series heads to the Sachsenring this weekend in Germany.