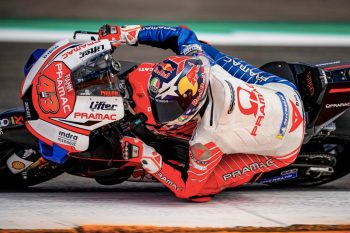 Australian fan-favourite Jack Miller has expressed frustration following a difficult outing at the Dutch GP, explaining the Michelin tyre offering has limited his performance over the last two rounds.

The Pramac Racing ace piloted his Ducati Desmosedici GP19 to P9 after starting from the fourth row, where he was unable to utilise Michelin’s soft option on the rear, and instead, was forced to be equipped with the hard offering and settle into a ‘steady’ race pace.

“10 seconds between Petrucci and myself is not good enough – I’m not happy with that,” Miller told Crash.net. “But I didn’t feel comfortable. We needed some points today – I managed to do that – I never lost a position over the race so I’ll take it.

“I’m not happy at all. I made my thoughts clear to the guys in blue and to other people, just to see what’s actually going on here because it’s two races in a row that we can’t use the soft at all – no way.

“Three laps and the thing’s done – well, the tyre life’s there and the weight’s there. In theory you can make the race distance. But your race pace is going to be all over the place. So it’s go with the stable, steady hard option.”

“You’re going that slow into the corner that when you come out in third gear it’s almost too long. It doesn’t want to pull it. You’re already feeling it coming around on you. You feel it and think, ‘That’s me – that’s all I got.’ So it’s frustration for the whole race. You’re riding to a number, to a lap-time. That’s all you can do.”

The Queenslander is currently ranked eighth in the championship standings as the series heads to the Sachsenring in Germany this weekend.