It’s been an incredible year for Yamaha-mounted Tom Toparis, dominating the Supersport category in the Motul Pirelli Australian Superbike Championship (ASBK), while being a podium regular in the IDM Supersport 600 Championship in Germany. We tracked down the New South Welshman to gather his thoughts for this latest instalment of Five Questions Why! 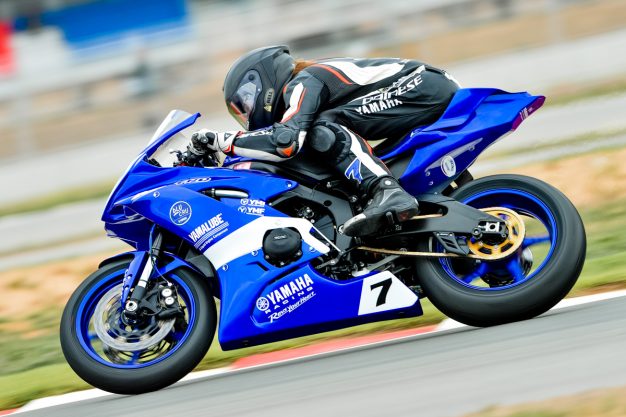 Why have you been so competitive right off the bat in Germany?

I think it’s been good preparation – it’s hard when people go over and do things in grand prix, because in Australia there’s nothing to train on, where as in this case, I’ve ridden the R6 a lot and feel really good on it. The fact I’ve ridden it a lot and feel comfortable, I more or less basically have to just go over there and learn the tracks – it makes the job a lot easier and actually achievable. It’s been a great start to the season in general, so hopefully I can still win races – I just want to win races now.

Why is it challenging to balance the IDM series along with ASBK?

It’s tough one, but in a way I’m really lucky I can do both. The flights from here to there are over a day long, and I have to come back and forth a few times this year. It’s so good to be able spend more time on the R6, and even after just two months over there, the main difference is just having data – the biggest thing for me is learning everything about the bike and learning settings – things that will just make my life easier here in Australia. I didn’t get to test for Morgan Park, but because I’ve been on the bike, it takes the stress away. Hopefully we have a good weekend this weekend, I’m really looking forward to it.

Why has racing in Europe benefited you in Australia?

I haven’t actually seen yet because I just got back, but I think for me, going over there you have a data guy, and every session you sit in front of a computer screen and double your knowledge and study. I speak to the guy every day about ways to improve – I’m lucky I have the same suspension over there as here, so everything is basically identical. Just experience with the bike – I think I have a really good feeling and a great base with the R6 no matter what, and for me as an actual rider, just knowing how to set the bike up. Learning how to set the bike up myself in a way – I can self diagnose issues on the bike at a much more higher standard now than before, so I can understand what the bike is doing, which is super important. That’s probably the main thing. It’s going to be really good now coming back home – I feel really good on the bike and I’m really looking forward to Morgan Park. It was a good track for me last year, so hopefully I can get some really good, solid points for the championship.

Why will you chose ASBK over IDM when they clash later this year?

The IDM thing came together really late, and I already committed to doing the year with Yamaha and to win the championship here. Firstly, it’s a loyalty thing, for sure. This is my fourth year racing in Australia and I still haven’t won a championship, so it would probably be stupid to miss a round here and not win the championship. I’m not leading the championship over there – I’m coming second – so the chances of winning there aren’t as great there as they are here. I need to wrap a championship up this year, no matter what. My full focus is on Australia and it always has been. If I do good job down here, hopefully next year I can be racing in Europe full-time. That’s the goal. I don’t think it really matters too much if I don’t win a championship in Germany, I just need to be at the front, winning races, and learning tracks quickly. It’s full focus on Australia, and anything that happens in Europe is a bonus.

Why can we expect you to continue your winning way in ASBK Supersport throughout the second half?

I’m definitely going to try really hard. I’ve got such a good team here with Sam, Marty, and Robbie, and obviously my dad and brother. I think having Marty there – he knows all the things I want – but I think we’re coming into some good tracks. Morgan Park we didn’t get to test at, so that will be a tough one, but then there’s Winton which I enjoy, Phillip Island is probably my best track, and Eastern Creek is one I’ve done a few laps at. I’m just going to do everything I can, keep training and just be consistent. I definitely want to do my best to win as many races in the last eight races. Everything seems to be good at the moment, I just need to get through this weekend – it will probably be the toughest of them all. It’s going to be quite cold up there also – coming from Europe, it was in 30s when I left, and now here in Goulburn it’s borderline zero, and Morgan Park is usually not too much different. It’s going to be a challenging weekend in that aspect. I’m just really looking forward to getting back there – it’s a great little track and there’s usually a lot of people there watching, so it’s going to be a really good weekend.