Jones in ‘best position to win’ at Morgan Park 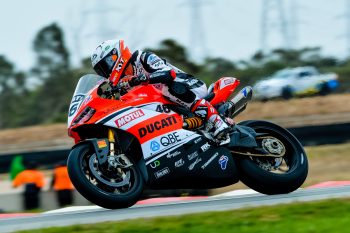 DesmoSport Ducati’s Mike Jones is confident he’s in the ‘best position to win’ this weekend at Morgan Park as the Motul Pirelli Australian Superbike Championship (ASBK) resumes from an extended break.

The former premier class champion, who signed on with the Ducati for the remainder of the season ahead of The Bend, has been ultra consistent throughout the first three rounds, however an overall victory this year has so far eluded him.

Serving as somewhat of a ‘home track’ for not only himself and the DesmoSport team, Jones is adamant a positive test at the venue has positioned him strongly for this weekend’s two encounters.

“I really like racing at Morgan Park,” Jones stated. “We tested here recently with really positive results and it feels like we’re in a great position for this weekends racing. I’ve done a lot of laps here over the years, so I’m confident of a strong result and I love racing the Panigale FE.

“I’m constantly working on adapting my style as Ben and Paul work on improving the bike to find the best overall result and it’s paying off. Add to that having Troy Bayliss in the pit, and on the track in testing for even more feedback, I honestly believe we’re in the best position to win this weekend.”