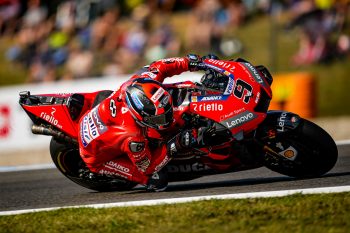 Mission Winnow Ducati has signed Danilo Petrucci for the 2020 MotoGP World Championship following a strong opening half to his maiden season with the factory outfit.

Petrucci made his debut this year with the squad after four seasons onboard the Ducati fielded by the Pramac Racing team and has immediately shown great form with three podiums, including a fantastic win at Mugello in front of a home crowd.

The Italian currently sits in third position in the world championship, eight points behind his teammate Dovizioso. The two Ducati Team riders have been the most competitive pair on track this season so far and lead the Team rankings with 224 points scored in total.

“I’m very happy to continue with Ducati for another year,” said Petrucci. “It was my goal ever since the beginning of this new chapter, because we immediately found great chemistry with the team. In this first half of the season we were able to progressively increase our competitiveness, taking two podiums and an unforgettable win.

“To renew our collaboration before the summer break makes me even more serene and confident about the future. Now I simply want to stay focused and continue to improve as a rider to achieve even better results on track. We’re third in the Championship, and we want to finish the season within the top three.”

Australian Jack Miller, who was previously linked to the seat, is understood to be signing on with Pramac Racing for 2020 aboard a Desmosedici GP20.