Marquez fastest in MotoGP practice at the Sachsenring

Australia's Miller seventh on the timesheets in Germany. 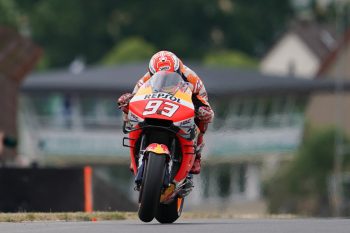 Marc Marquez (Repsol Honda Team) topped the timesheets on day one of the German grand prix, but the reigning champion had some competition at the venue he’s reigned nine times in a row.

The French rookie was fastest in FP1, and in the latter stages of the day he was denied the chance to improve his lap first as he got held up by teammate Franco Morbidelli (Petronas Yamaha SRT) and second as he caught Takaaki Nakagami (LCR Honda Idemitsu) at the end of his final push. Does the rookie sensation have more in the tank for Saturday?

Conditions were warmer in the afternoon and almost the entire premier class field were able to improve their FP1 times within ten minutes of FP2 on a day of good weather in Germany – sometimes easier said than done – and two action-packed sessions, including 66 degrees of lean for Marquez and Quartararo’s determination to try and dethrone the king of the Sachsenring didn’t disappoint.

And although the Frenchman didn’t manage that in the end, Quartararo’s rookie run of form in recent sessions is akin only to Marquez’ speed in 2013 – with the rookie now in the top three for 16 sessions in a row – a good omen for the rest of the weekend.

Assen winner Maverick Vinales (Monster Energy Yamaha MotoGP), who finished on the podium here last season, was the man in P4 after the first day and just over a tenth off Quartararo, with Pol Espargaro (Red Bull KTM Factory Racing) next up to complete the top five – the Spaniard putting in another stunner of a performance for Austrian factory KTM.

Cal Crutchlow (LCR Honda Castrol) was P6 despite struggling through the pain barrier after a cycling mishap, just ahead of the fastest Ducati on day one: Jack Miller (Pramac Racing). Miller led a Borgo Panigale 7-8-9 as he headed Danilo Petrucci (Ducati Team) by half a tenth, with Petrucci’s teammate Andrea Dovizioso only a further 0.005s in arrears.

Valentino Rossi (Monster Energy Yamaha MotoGP) completed the top ten on Friday and therefore currently holds the last of the provisional places in Q2. The ‘Doctor’ was also in the top three in the morning.

Aleix Espargaro (Aprilia Racing Team Gresini) was an infinitesimal 0.005s off that fastest 10, and he’ll be the first pushing to try and crack it on Saturday morning in FP3, ahead of Franco Morbidelli (Petronas Yamaha SRT), rookie Joan Mir (Team Suzuki Ecstar) and home hero Stefan Bradl (Repsol Honda Team), who is standing in for the injured Jorge Lorenzo. Takaaki Nakagami (LCR Honda Idemitsu) completed the fastest fifteen.

It was a day with low rates of attrition and only Francesco Bagnaia (Pramac Racing) suffered a crash, the Italian going down in FP1. He missed FP2 as he headed for a check up in Chemnitz in the afternoon, rider okay.

Brad Binder (Red Bull KTM Ajo) won the 2018 German GP, and returning to the Sachsenring, it’s the South African on top once again in the Moto2 category. Binder was a stunning 0.380s clear on Friday, with Xavi Vierge (EG 0,0 Marc VDS) in second and Iker Lecuona (American Racing KTM) in third, but with an identical lap-time.

That speaks volumes of the competitive field behind Binder; second to P26 covered by less than a second. Australian Remy Gardner (SAG Racing Team) was 18th fastest.

It was close at the top in Moto3, with Ayumu Sasaki (Petronas Sprinta Racing) just edging out Raul Fernandez (Sama Qatar Angel Nieto Team) for P1, with the Japanese rider fastest in FP2 and the Spaniard in FP1. They were split by just 0.065s, with Marcos Ramirez (Leopard Racing) completing the top three despite a crash in FP1 for the Catalan GP winner. 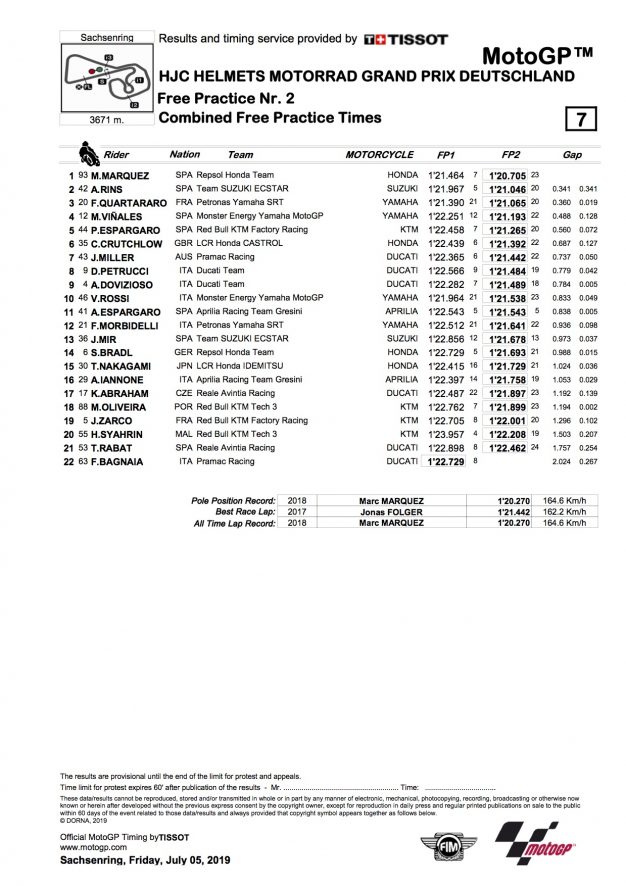 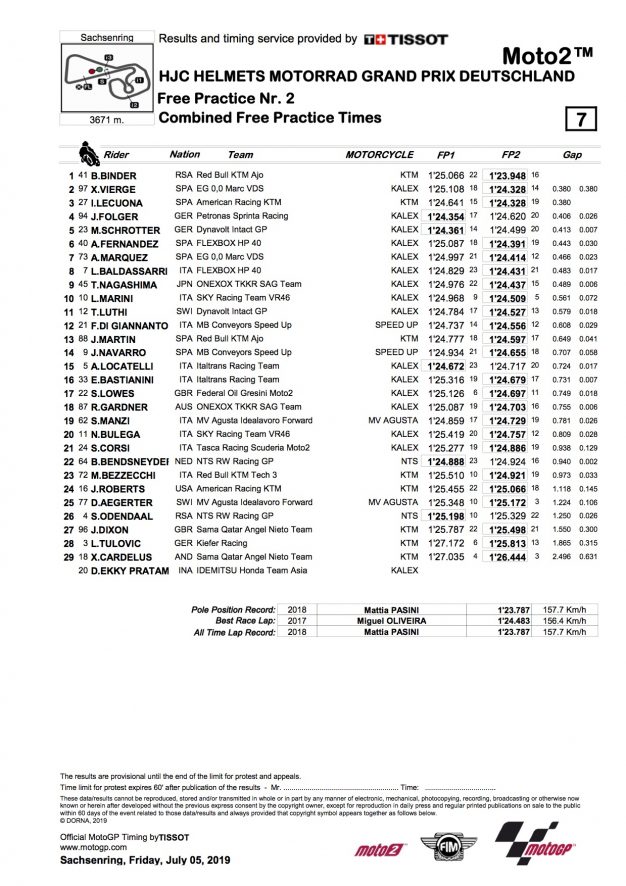 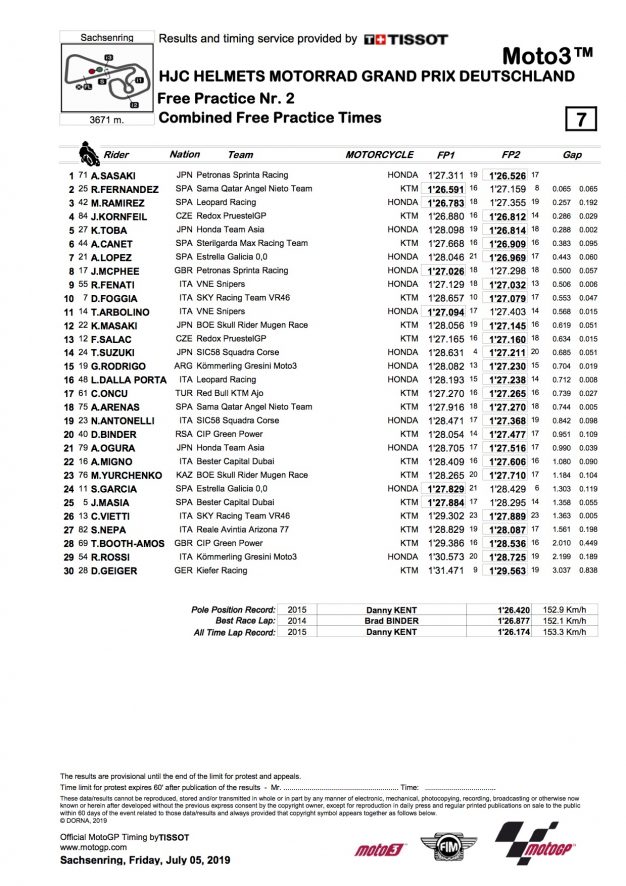 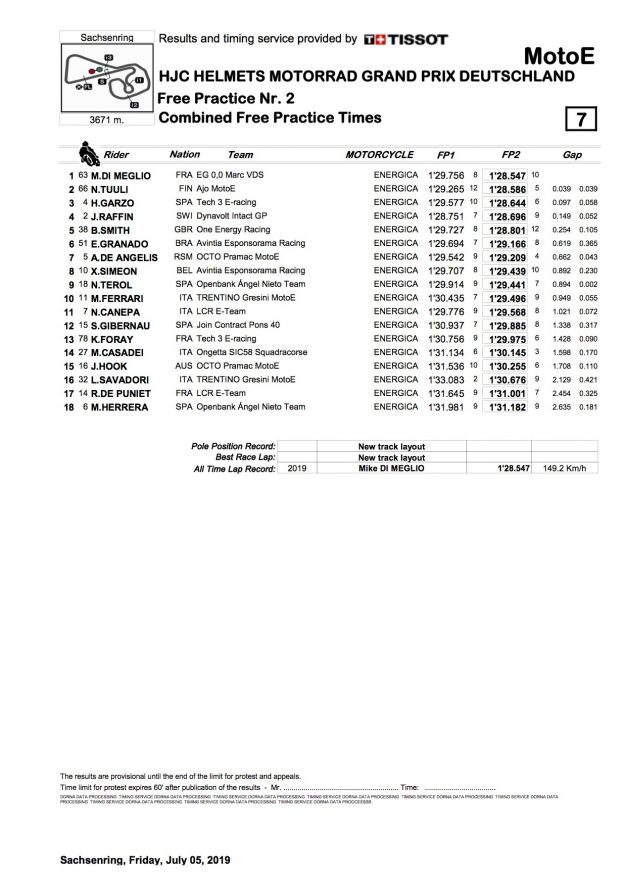