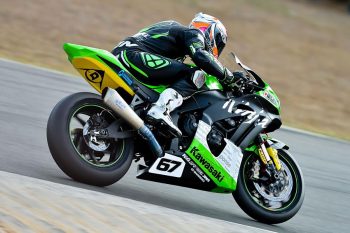 After a setting a time of 1:13.337 in qualifying at the Australian Superbike Championship (ASBK), at Morgan Park Raceway.

BCperformance Kawasaki Racing Team superbike racer Bryan Staring was confident of strong race results starting from fifth on the grid, however a crash in race one left Staring finishing in 12th position. While Race 2, after a bad start, Staring fought back and finished in 4th place once again highlighting the strengths the rider matched with the performance of the Dunlop KR108 tyres.

Bryan Staring: “Mixed results over the weekend for us. I’m kicking myself for falling in race one. I had a sniff of a podium with three laps to go and I was pushing hard because I had great grip. Unfortunately, I pushed too hard. I was lucky to pick up the bike and salvage some points for 12th place. Race two started difficult for me because I couldn’t engage my launch control mode. There must have been some debris in the switch block from the race-one crash. I had an incredibly hard-fought race coming through from 8th to 4th. Again, I could smell the podium, but just missed out. My Dunlop tyres performed fantastically all weekend and their technicians were as supportive as ever.”

Dunlop Motorsport Manager, Robbie Bugden: “Morgan Park Raceway is a challenging 3km circuit for motorcycle racers, with bumps, particularly in the apex of corners, heavy breaking at turns one and four, as well as some some tight and twisty sections. We had the opportunity to introduce a new tyre this weekend, the KR108 MS-0, to give ASBK racers a softer option on tracks, such as Sydney Motorsport Park, where the nature of the circuit, climate and surface will favour the tyre. With the KR108 MS-1 rear on the BCperformance superbike, Bryan Staring showed once again that Dunlop offers incredible grip, strong lap times and consistency. Staring not only set the second fastest lap of the race (1:13.136) on lap four, but went on to be just two-tenths from that time on lap 15 (1:13.295).

Round five, of the seven-round ASBK Championship, will be at Winton Motor Raceway on September 6-8. With another large break in the schedule, the Dunlop technical team will continue to move to events and racetracks throughout the country, offering technical advice and tyre fitting to competitors.