‘What could’ve been’ reflects Jones after costly race two error 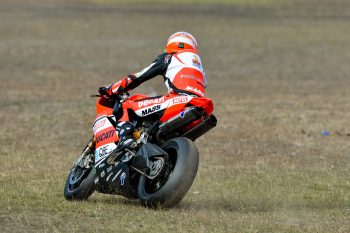 Earning pole position and dominating race one, Mike Jones was primed to take out his first overall victory of the season at Morgan Park’s fourth round of the 2019 Australian Superbike Championship (ASBK), although a costly mistake at the beginning of race two saw the former champion charge from outside the top 10 and into a podium position.

The DesmoSport Ducati rider led the field throughout the opening moments of the final encounter before making a rare error that forced him off the circuit and demoting him to the rear of the field.

In an inspiring ride, Jones sliced his way through the field in the 16-lap outing, crossing the line in P3 for second overall – just one point shy of victor Wayne Maxwell (Team Suzuki Ecstar Australia).

“I’m just really disappointed to make that mistake so early on in the race,” Jones stated. “It was such a small mistake, but it cost me dearly.

“I just gave it 110 percent and rode my way back to third position – I’m obviously very happy with that, but it’s obviously disappointing because I know what could’ve been if I didn’t make that small mistake at the beginning. Anyway, it what it is – overall, it was a really good weekend for us [with] good championship points.”

Despite missing out on victory, Jones obtained the points lead in Queensland, where he now holds a one-point advantage over Cru Halliday (Yamaha Racing Team).