Capitalising on opportunities the goal for Halliday in ASBK remainder 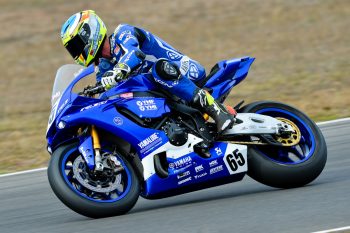 Yamaha Racing Team’s Cru Halliday has expressed the importance of capitalising on opportunities in the next three rounds of the 2019 Motul Pirelli Australian Superbike Championship (ASBK) after finishing just off the podium at Morgan Park’s fourth stop on Sunday.

The 2018 Supersport champion rode strongly all weekend long, completing qualifying in second position before going onto lodge a 3-5 scorecard for fourth overall.

“Overall, it was a reasonable weekend although my goal for every round is to finish on the podium and I wasn’t able to do that this weekend, so I’m a little disappointed in that,” Halliday explained.

“But, the positives to take from it are that we are right in the hunt for the championship and the next couple of tracks coming up are to my liking. The team has the bike in great shape and I feel confident on every track we go to but there always that bit extra belief on tracks where I have had success before.

“With the points being so tight at the top, I need to make the most of these coming rounds. Take the race wins when they present themselves and keep racking up the top three results when a win is out of reach. It is the race strategy that has worked for me this year, so I will keep working away at it as there are still plenty of laps left on this championship.”

Despite finishing shy of the box, Halliday maintains second in the championship rankings, still one point behind the leader, although this time it’s Mike Jones (DesmoSport Ducati) who controls the standings.