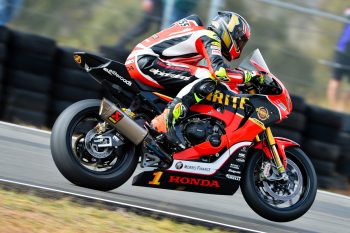 Reigning champion Troy Herfoss says Morgan Park’s fourth stop of the 2019 Motul Pirelli Australian Superbike Championship (ASBK) was one of his most difficult weekends in recent times, although he was able to breakthrough for a motivating podium result.

“It was a really good finish to the weekend, that second race,” stated Herfoss. “This was the hardest weekend I’d had in a long time, so I’m just so happy to close the gap to the championship leader down to 15 points.

“We’ve come out of here mistake-free, put it on the podium and are in a good position leading into Winton. I’m happy with where we’re at for the moment and we will keep working hard to get back on the top step.”

Team manager Shaun Clarke added: “This was a very tough round for us to begin with, but we chipped away all weekend and pretty much got on top of it towards the end there with Troy. His ride in the final race was really good. Troy’s in a strong position and is well and truly in the hunt, so we won’t be giving up.”

The Australian Superbike Championship now heads to Winton in Victoria on 6-8 September for round five of the series.