MotoGP rookies crashes out early at the Sachsenring. 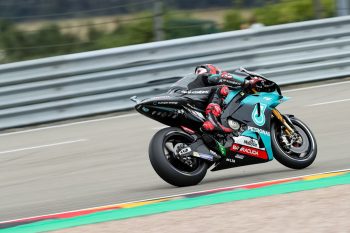 Following a run of impressive results, MotoGP rookie Fabio Quartararo admits hesitating while attempting a pass led to a race-ending mistake at the German grand prix on Sunday.

The youthful Frenchman started from the front row and looked set for yet another strong performance, although his campaign was cut short following the opening lap when he crashed out of the race at turn three.

“I made a small mistake – I was trying to overtake another rider and I hesitated a little about whether or not to do it and ended up going into the corner with too much speed and lean angle,” Quartararo explained.

“It’s the first mistake I’ve made in a race, and I’ll learn from it and come back stronger. The first half of the season has been really positive – we didn’t expect some poles and podiums. I’m happy with the balance of the year so far and really looking forward to the second half.”

The Petronas Yamaha SRT rider sits eighth in the championship rankings at the series heads into a month-long European summer break.