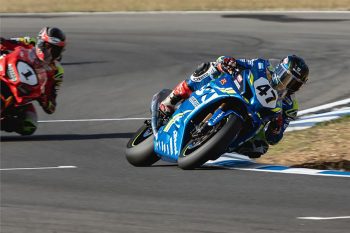 Round four of the 2019 Australian Superbike season saw all the hard work by Team Suzuki ECSTAR Australia come to fruition with Wayne Maxwell claiming the overall victory for the weekend at Morgan Park Raceway aboard his GSX-R1000.

After starting from P3 on the grid, Maxwell lost a few positions early on and dropping back to P7. In typical Maxwell fashion, the wily Victorian put the hammer down on his PTR-tuned Suzuki and started charging his way forward through the pack, eventually finishing in P2, just ahead of Cru Halliday.

Race two saw a better start for Maxwell, battling with the lead group from the onset and later for the lead with Troy Herfoss, controlling the lead to take his first victory since round one, the overall for the round win for the weekend and climbing to fifth place in the championship standings.

For teammates Josh Waters and Alex Phillis, it was a weekend of consistent results, finishing in P5 and P7 in Race 1, then P6 and P10 in Race 2 respectively.

With the championship battle tightening up, Team Suzuki ECSTAR Australia currently hold down three top-10 spots in the rider points standings, whilst concurrently leading the manufacturer’s standings as the series heads to Winton Motor Raceway in September.