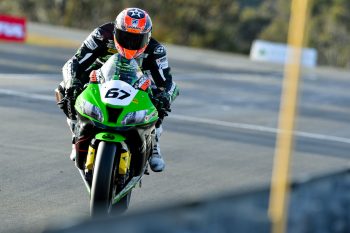 Western Australian Bryan Staring has described his weekend at Morgan Park’s fourth round of the 2019 Motul Pirelli Australian Superbike Championship (ASBK) as ‘contrasting’ after crashing in race one, yet he put in one of his strongest performances at the Queensland venue.

The Kawasaki BCperformance rider, who controlled the points standings heading into the weekend, qualified in P5 before putting in a strong challenge for a podium finish in the opening outing, however his campaign for a top three finish came undone after losing the front end into a turn – he was able to remount and salvage 12th.

Bouncing back in race two, the former Australian champion engaged in a thrilling three-rider battle with Mike Jones (DesmoSport Ducati) and Cru Halliday (Yamaha Racing Team), ultimately getting the better of the latter to finish in fourth for sixth overall.

“It was such a contrasting weekend, because I’m disappointed that I crashed in that first race, but the good thing was that I didn’t damage the bike and managed to salvage five points,” said Staring. “I was really in the zone in race one and got a sniff of the podium, so I was pushing for it!

“Race two was brilliant, actually. Following the crash earlier, I unfortunately had some dirt in the switch and couldn’t activate my launch control, so that put me way back off the start. I fought my way through from there and was again in the mix for a podium – fourth was good and we were really strong this weekend.”