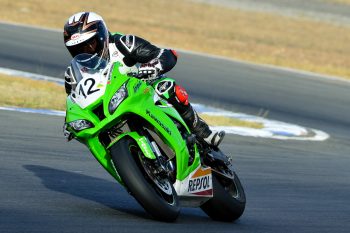 Kawasaki-mounted privateer Matt Walters will look into a ‘strange’ arm-pump issue he encountered at the weekend’s fourth round of the Motul Pirelli Australian Superbike Championship (ASBK), which only affected him in the one arm.

Walters expressed dissatisfaction in his 8-9 scorecard for eighth overall after considerable testing at Morgan Park, although he’s content to take home strong points and is confident of achieving his target of a top five finish in the coming three rounds.

“I’ll have to look into some arm-pump issues that I hadn’t had for a few years,” Walters commented. “It was a bit strange, because it was just in one arm and I didn’t have it in testing – it only came during the races. I’ll be looking into that.

“I was probably hoping for a little bit more in terms of the result. Since we had done a fair bit of testing at Morgan Park, I was confident we could get a better finish, but it didn’t come this weekend. We managed to get some good points though and stayed in the hunt, so I was able to make up some positions in the championship and that was good for us.

“I’m definitely happy with the way it all went here though and I’m still going into the final few rounds full of confidence. We’ve been around eighth and ninth for a while now, so it would be nice to try and move up because my goal is to get into the top five. I feel that’s where we should be, so I will training really hard over the next few months.”

The New South Welshman is currently ranked seventh in the championship standings as the ASBK heads to Winton in Victoria on 6-8 September.