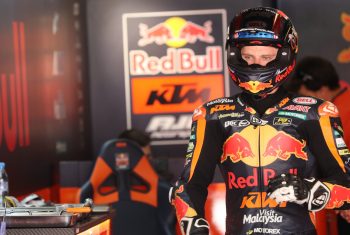 The 23-year-old 2016 Moto3 world champion will steer the KTM RC16 next year after three seasons, three victories and eight podiums to date in the Moto2 category.

Binder made his grand prix debut in 2011 as a Red Bull MotoGP Rookies Cup race winner and grabbed his first silverware in 2014. He claimed the 2016 world title in just his second term with Red Bull KTM Ajo, becoming South Africa’s first world champion in 36 years and just the third from his country before graduating immediately to Moto2 with the same team.

“It is incredible to have this opportunity,” said Binder. “I want to say a huge thank you to KTM, Red Bull KTM Tech3, my manager and my family for helping me get to the premier class and to be able to give it a try.

KTM motorsport director Pit Beirer added: “To be able to sign Brad Binder for our MotoGP project is an exciting moment because he has been with us for five years already and is one of our world champions. We have a strong story and connection and we’re really happy that it continues.

“It is clear we all have a big challenge in front of us and we also feel responsible for him to be able to maintain this good path we have together. We also like the fact that Brad has this distinctive riding style that allows him to push a bike and project to the maximum.

“We feel that he ‘fits’ to us, and we cannot wait to see how he handles and attacks a MotoGP bike. I’m sure he can add some extra and special things because he has done that with every motorcycle he has raced so far and it will be a highlight not only for us but for all MotoGP fans.”

Binder will join Red Bull KTM Tech3 for what will be the team’s second season in orange and the early stages of a young project for both the squad and the brand. His signing indicates Hafizh Syahrin will depart the squad at the conclusion of the year.