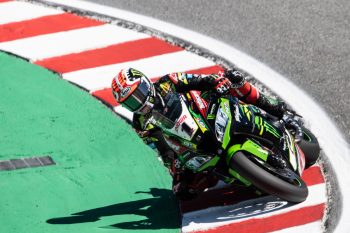 Four-time defending champion Jonathan Rea admits a minor set-up change following the Superpole race made an adverse impact on his feeling with the Ninja ZX-10RR for the final outing, denying him the chance to complete a perfect weekend at Laguna Seca’s ninth round of the 2019 Motul FIM Superbike World Championship (WorldSBK).

Rea captured victory in race one before setting a new lap record on his way to winning the Superpole race, although he was unable to challenge Chaz Davies (Aruba.it Racing – Ducati) for top honours in race two, settling for second after discovering a less than ideal feeling with the front-end.

“I would never have believed you if you told me I would come here and set a new lap record, win two races and take the overall, so it has been a great weekend,” said Rea. “We made a very small change to the bike between the Superpole race and race two. My feeling was completely different, which we did not expect.

“There was a lot of front movement, whereas all weekend before that we had been strong with the front. I had a few small warnings, just enough for me to roll it back a bit, think about finishing and we got it done. I am just super-satisfied with this weekend and I did the best I could in race two. I am looking forward to the summer break now.”

Rea was able to capitalise on a poor weekend by championship rival Alvaro Bautista (Aruba.it Racing – Ducati), extending his points lead out to 81.