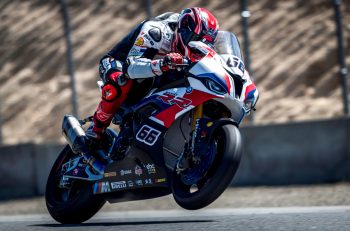 British ace Tom Sykes has praised the BMW Motorrad WorldSBK Team as the world championship heads into the European summer break, declaring the squad’s progression from round one as ‘impressive’ in what has been the manufacturer’s return season to WorldSBK.

Sykes has delivered an array of strong results in recent rounds, landing on the box in the Superpole race at Laguna Seca’s ninth round over the weekend in America, which he paired up with a 4-5 scorecard in races one and two.

His recent stride of form, a major result of further development with his BMW S 1000 RR, is contrasting to his results throughout the early rounds of the series, where he battled to be a top 10 regular.

“We’ve come away again with a bag full of top five finishes, including a podium in the sprint race,” Sykes explained. “Overall it was a very productive weekend for the whole BMW Motorrad WorldSBK Team.

“The bike seems to be not getting the best from the tyres at the moment but we got a lot of information this weekend, having said that it was a complete different story at the end of that race two, we had a lot of pace and I closed the gap to Alex Lowes so that’s certainly positive to take with us.

“We now have the summer break coming up so it’s just cool that at the right time we got a lot of information at the weekend and hopefully now the guys in the team can put this to good use. There are still areas to work on but overall the whole package is quite promising and having three podiums at the last three rounds is not too bad against these experienced manufacturers.

“I’m enjoying riding, have a great relationship with the team and BMW and it’s needless to say that we are heading in the right direction. I think everybody has seen that the progress we’ve made from the opening round until now has been quite impressive.”

Sykes is currently ranked eighth in the championship standings, as the series is set to resume on 6-8 September at Portimao in Portugal.