From adventure bike events with Yamaha to WorldSBK in California, the mid-portion of 2019 has already been a packed one. This is Cycleview on CycleOnline.com.au.

The Yamaha Tenere 700’s arrival is right around the corner, set for release locally in December and this week CycleOnline.com.au was fortunate enough to attend the Trans Tasman Tenere Tour event in Sydney. You may have seen our Overview edit yesterday, which was just a simple insight into those events and why Yamaha is hosting them nationwide.

And everybody’s buzzing about adventure bikes, especially these mid-capacity models – it is clear that it’s one of the most important segments in the industry at this moment. You have to admit that the 700cc to 800cc capacity is such an interesting and obviously appealing size bike for that type of riding. 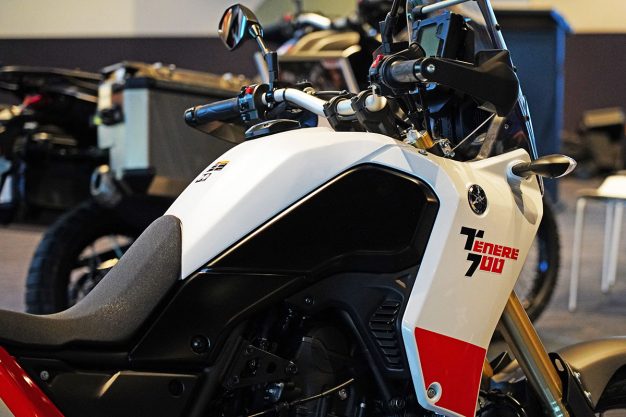 Whether you come from a sportsbike background, nakedbike background, touring background or even a dirt bike background, the adventure market is drawing all kinds of riders into it. We would love to create more content around the segment, however, of course, to really do that it means time out of office time on the bike and a lot of dedication to the particular kind of riding (time that we unfortunately don’t have!).

From a news perspective, we always try to cover the racing from a variety of angles both here in Australia and abroad, so that is definitely an aspect that keeps us extremely busy day in, day out. Magazines have so far proven to be the most suitable for compiled adventure content, plus a YouTube presence is a perfect way to cover the market with long-form information.

Regardless, we will detail new models as they are unveiled, announce pricing and release dates when available for all the latest models, plus hopefully, when the opportunity is there we can complete a share of reviews at launches – even though they’re probably most likely just going to be Impression-type tests for a glimpse into features, benefits, etc.

Back to the original topic though, the Tenere Tour now heads to Melbourne tonight after it’s already been in Mackay, Brisbane, Newcastle and Sydney. Beyond Australia, the crew will also be heading across the ditch to New Zealand. Whether it’s the brand new models, the genuine parts and accessories or the gear available, it’s obvious that Yamaha is very serious about this type of riding.

Combine all of that with the expert insights of Andrew Clubb, Peter Payne, Stephen Gall – who are all synonymous with the Tenere Tragic event – plus the guest appearance of Dakar Rally racer Rod Faggotter and more, it really is a significant opportunity to learn more about the brand new Tenere 700. Who wouldn’t be excited about that? Here’s Jeremy with more…

It’s crazy the twists the current Motul FIM Superbike World Championship (WorldSBK) has taken in recent rounds, with a complete overhaul at the top of the leaderboard.

While Jonathan Rea’s (Kawasaki Racing Team) promotion to leader of the standings is old news, the four-time defending champion managed to stretch his advantage out to a staggering 81 points ahead of Alvaro Bautista (Aruba.it Racing – Ducati) last weekend in America.

Bautista, who once held a 60-point lead over Rea following a dominant start to his rookie season, failed to score any points at Laguna Seca, which came at an increased cost of a shoulder injury.

The Spaniard is fortunate the series heads into an extended break for the European summer, allowing him adequate time to recover from the injury. However, with just four rounds left to run, it’s going to be an incredibly tough task where luck is going to have to favour him in overcoming the current points gap.

It’s been a strange decline in form from Bautista, who’s dominance came to an almost abrupt halt. While the title is almost out of his hands, he’s still a mathematical chance. And as we’ve seen so many times in motorcycle racing, anything can! But, we will have to wait a couple of months for WorldSBK to return at Portimao in Portugal.