Independent squad in search of factory bikes and support from next year. 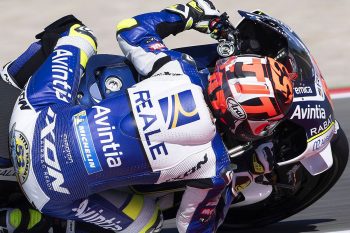 Reale Avintia Racing has re-signed Tito Rabat to a two-year contract extension that will see the Spaniard stay put through the 2020 and 2021 MotoGP World Championship seasons.

Rabat had been linked to a move to the Superbike World Championship (WorldSBK), however this confirmation now squashes those rumours and the Avintia team is confident it can secure factory equipment – possibly Suzukis or Aprilias – from next year.

“I’m very happy that I signed for two more years with my team,” Rabat said. “The best news is that we are going to have factory bikes from 2020, which is crucial to our goal of fighting for top positions in every race. The MotoGP class is more competitive than ever and you need to have the best machinery to get good results.

“I want to thank Raul [Romero] for his confidence in me. We had a difficult start into this year, but we got stronger in the last few races. Knowing that I will continue for two more seasons is a boost to my confidence and I’m sure I‘ll be back stronger in the second half of the championship.”

Avintia Racing owner Raul Romero commented: “It is a pleasure to announce that Tito will continue with us for the next two seasons. There has been a lot of talk about Tito’s future and the future of the team, but with this announcement, we made it clear that we are moving forward together and that we will be stronger than ever before.

“The team grew steadily since we arrived in MotoGP and the next step is to get factory machines, the same way as all the other independent teams in the championship. We are working on this right now and we are also in negotiations with a big sponsor that perfectly matches the size of the project we are planning for the upcoming seasons.”

Following his serious accident during the British Grand Prix last season, Rabat struggled in a difficult first part of the championship, but in the last two races he began to recover the feeling with his bike, including a ninth-place finish at Catalunya.